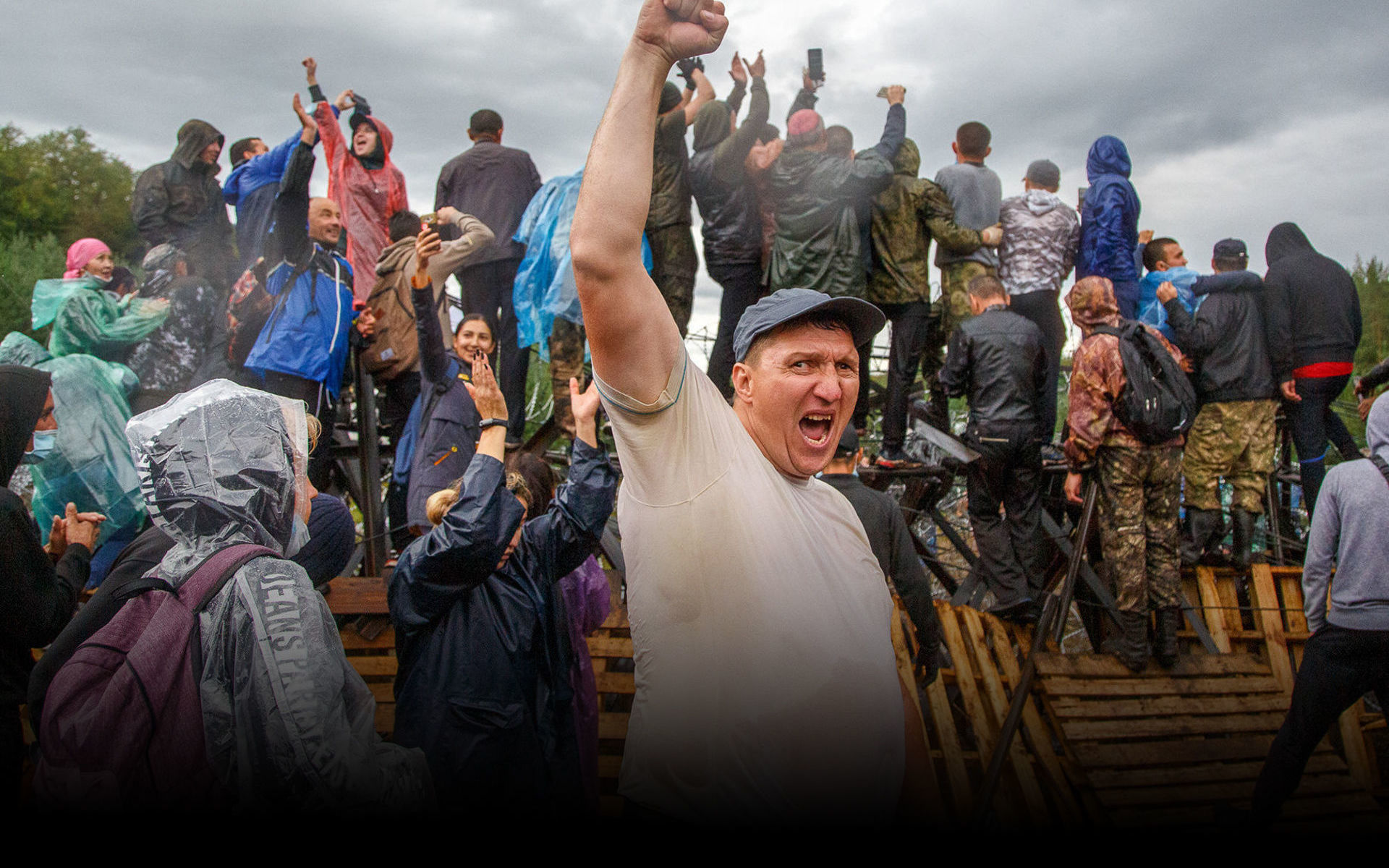 We explain the origins of the poison that put Russian opposition figure Alexei Navalny in a coma — and the timing behind the attack on him; we investigate who exactly the Kremlin has sent to Minsk to save the collapsing dictatorship of Belarus; plus, we document another big environmental uprising in a Russian province that made national headlines.

The Poison and Timing of Navalny’s Attack, Explained

Russian opposition figure Alexei Navalny remains in a coma in Germany after getting poisoned in Russia. The tragedy of the sudden attack on him and his subsequent evacuation to the EU was well-covered internationally. What remains unclear is the poison's origin. How exactly is it connected to other high-profile poisonings of Kremlin critics, and why now? But don't worry — we've got you covered this week.

THE POISON. We reached out to high-profile experts and scientists to analyze the substance Navalny ingested. They all point out that it is similar to Novichok — the nerve agent used to poison former double agent Sergei Skripal and his daughter in Salisbury, England two years ago. Both Novichok and the poison used on Navalny are cholinesterase inhibitors, which are the main chemical components in weapons like sarin gas.

NAVALNY'S SYMPTOMS ARE SELF-EVIDENT. They are identical to those from exposure to cholinesterase inhibitors, Yuri Pachin, a biological sciences doctor, tells us. They include constriction of the pupils, increased nasal mucus, indigestion, watery eyes, and seizures. Some people experience anxiety and loss of vision. Then the convulsions begin, and some victims fall into a coma or suffer cardiac arrest.

RUSSIAN OFFICIALS LIED. Russian labs can definitely detect if someone has ingested a cholinesterase inhibitor, one toxicology expert told us. The effect of the poison would last for quite some time, and the symptoms would be obvious. That said, it might be difficult to detect exactly what type of poison was used, since that would require more sophisticated laboratories.

WHAT'S IN THE TIMING. Navalny's supporters believe that one of the reasons he may have been poisoned was to get him out of the way during the upcoming local elections. On September 13th, Russians will vote for heads of 13 out of 85 regions. Navalny has been promoting the "Smart Voting" strategy that deploys a coordinated protest vote to prevent the ruling United Russia Party from winning.

COVERING UP ANOTHER ELECTION FRAUD. The upcoming election is not going to be as big as the previous vote on power-grabbing constitutional amendments. However, because the referendum was characterized by significant voter fraud, both Russians and the Kremlin are extra vigilant about these elections. Officials will try to falsify and influence the results in a less obvious fashion - since they don't want to make the already record-high public discontent with the Kremlin worse. The voters will be looking at ways to channel their protest vote since all independent candidates are excluded from the ballot.

WATCH IRKUTSK AND ARKHANGELSK. Five out of 18 regional elections are especially tricky for the Kremlin. The Irkutsk and Arkhangelsk regions are the most at play. In the case of Irkutsk, officials are afraid of overspill from the neighboring Khabarovsk uprising. Being a lumber and energy powerhouse of the Russian economy, Irkutsk is similarly frustrated with sending so many resources to Moscow and receiving back peanuts in federal funds. In Arkhangelsk, the Kremlin's turf is shaky because of the Shiyes' environment uprising.

BACKSTORY. Navalny’s poisoning is part of a pattern. Numerous Kremlin critics and Russian dissidents have fallen ill or been killed by poison. In 2004, during Putin’s first term in office, the late investigative journalist Anna Politkovskaya said she believed she was poisoned after drinking a cup of tea on a domestic flight in Russia. Opposition activist Vladimir Kara-Murza says that he was poisoned twice. And of course there's the infamous case of  former Russian spy Alexander Litvinenko, who died in London after drinking a cup of tea poisoned with radioactive polonium. One could say that poison is the Kremlin's calling card.

Read our full interviews with experts on the Navalny poisoning here and the full explainer on the September 13 local elections here.

As popular pushback against rigged elections keeps growing, the dictator of Belarus Alyaksandr Lukashenka rushed to Putin for help. The Kremlin has kept a cautious distance, but the Russian President recently announced he would be willing to send security officials to aid the ruler if necessary. Still, he stressed that there is no need for that just yet. Nevertheless, there are growing numbers of reports about 'parachuted' Russians already on the ground and this week. We are fact-checking them.

AIDING WITH PROPAGANDA. It all began when Alena Martinovskaya, director of a state-owned radio broadcaster Belteleradio, was prevented from working on August 19. She told the public that Russian propagandists had been sent to the station to replace 'unreliable locals.' However, independent journalists are still struggling to identify 'parachuted' Russians, says our Belarus correspondent Iryna Khalip.

FIRST INDIRECT EVIDENCE. Take a change of language in the way the regime communicates. People have started wearing hoodies and t-shirts at Lukashenka's rallies using the Russian spelling of "Batka," a nickname for the former President (it roughly translates to "father," or father of the nation.) The rest of the country ridiculed the merch for its evident Russian roots: 'Belarusians have never once called Lukashenka "Batka." They called him Luka, and in recent months - by more diminutive Sasha 3% (ridiculing his actual popularity rate). For some reason, he was only ever called "Batka" in Russia and in neighboring countries,' points out Khalip.

SECOND INDIRECT EVIDENCE. On August 21, the Belarussian Ministry of Interior blocked access to several dozen websites just as Belarussian citizens were looking for information online. Russian propagandists, journalists, and PR specialists may have been brought into the country to fill the gap left by the blocked news website and flood the public with pro-regime propaganda. As a result, several websites that no one in the country had visited before suddenly rose to be among the country's twenty most popular.

THE TRUTH THEY WANT TO HIDE. Part of the reason for the media ban is the growing cache of stories documenting the widespread violence, torture, and inhumane treatment of protesters and journalists by the Belarusian authorities. Our own reporter shared a harrowing account of his time in captivity of Belarusian riot police. We keep his name private out of security concerns:

'People lay with their bodies on top of each other. Another man was thrown at my feet. Only one woman was allowed to remain standing. They threatened rape. "Who here is a journalist... dammit!" One of the thugs in charge entered the bus. He lifted my head by my hair, looked me in the face, and hit me in the jaw. A massive, smelly boot landed on my back,' our reporter recollects.

BACKSTORY.  Lukashenka took over Belarus in 1994, soon after the country’s independence. He has built the economy closely integrated with Russia and accepted geopolitical dominance by Moscow, especially after his regime (dubbed as ‘Europe’s last dictatorship’ back then) got ostracized and sanctioned by neighboring EU. But since 2014 the Belarusian autocrat tried to gravitate away from the Kremlin and relations between the two countries cooled. EU lifted sanctions in 2016. Minsk even claimed that it had detained Russian mercenaries ahead of the elections. So Lukashenka’s rapid pro-Russian u-turn of recent weeks looks like a desperate response to the growing uprising.

We follow an outburst of mass protests in the Ural region of Bashkortostan. Locals clashed with army, police and private security guards after several weeks of the standoff over local chemical plant Bashkir Soda Company (BSC.) It is another display of rising environmental frustration in Russian regions and the strengthening voice of historically oppressed indigenous people.

WHAT'S THE STANDOFF IS ABOUT. The dispute is over the company's plans to mine for limestone on a local hill named Kushtau. It is a protected natural resource and carries sacred value for Bashkirs, the region's indigenous population. Local people rose up against it, camped on the site for weeks, but eventually took a severe beating in a joint attack by the state and the plant's security forces.

PEOPLE VS A POWERFUL FOE. All of the BSC beneficiaries are private individuals. Among them are a former government official, a dentist, and the former head of a trash collection company. So the battle over Kushtau demonstrates who pulls strings in the Republic of Bashkortostan. All officials from the head of the region, Radiy Khabirov, to the clerks running regional administrations and the local security services, were sent to protect the soda company's owners' interests. Khabirov had said that Kushtau Hill will be developed no matter what.

PUTIN'S ROLE. Things changed dramatically, however, after President Vladimir Putin got involved. He announced that it might be worth looking at the legality of the Soda Company's activities. Before too long, the Prosecutor General began conducting an investigation. The development of the hill has been halted for now. Activists celebrated the victory but remained perplexed. Why did they have to endure clashes, beatings, and arrests, and why are officials suddenly paying attention now?

MORE PLAUSIBLE REASON THAT GOT PUTIN INVOLVED. Look at faltering ratings and the legitimacy problem of the Russian President. Recent public pushbacks surrounding the Shiyes railway station, the battle over a square in Yekaterinburg, and now Bashkortostan show that violent protests have developed into a publicity nightmare for the Kremlin. However, it doesn't mean that official heads will roll. Nobody responsible for violent attacks on Bashkir eco-activists is charged or fired. At the same police arrested 41 protesters, fined 20 of them, and opened a criminal probe for 'violence against law-enforcement.'

BACKSTORY. Bashkortostan joins the rising pushback in Russian regions against the country’s environmental degradation, with the Shiyes standoff and the recent Nornickel disaster remaining primary examples. Plus, with a majority indiginous Bashkir and Volga Tatar population, the region backs a growing nationwide trend of Russia’s indiginous nations mobilizing against an over-centralized state and claiming back their autonomy. In Kalmykia, for example, the majority-Buddhist region protested against a Kremlin-appointed Mayor, and in Buryatia, locals rallied against a rigged election for weeks. The ongoing Khabarovsk uprising is also a powerful display of anti-Moscow pushback.

Read our deep-dive into the Bashkir Soda Company here and our look at the recent Bashkir protests.