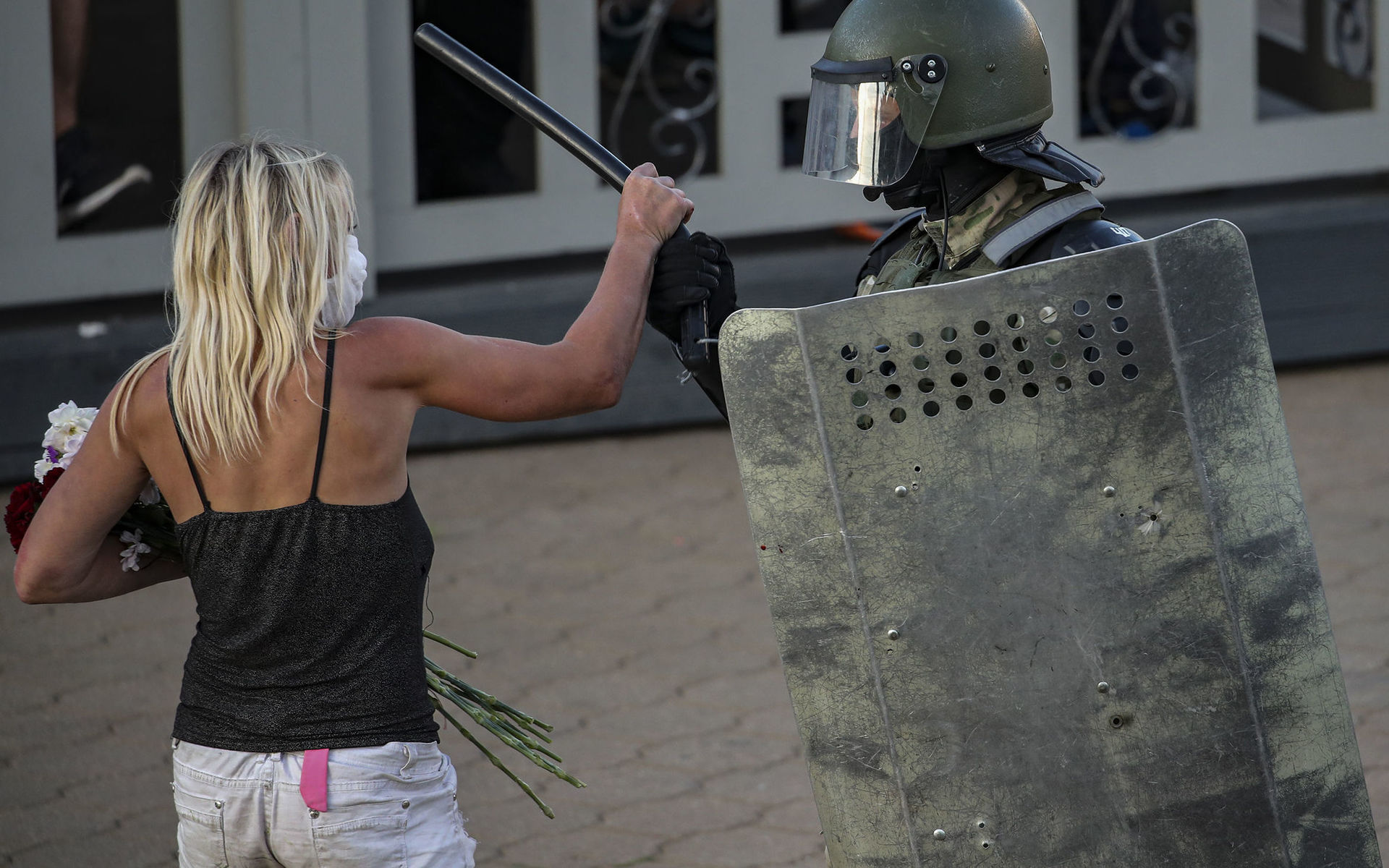 We keep reporting from the epicenter of Russia’s largest peaceful uprising in Khabarovsk — it has been on for a month now; the Kremlin extends the crackdown on Putin critics sentencing a group of young activists in what is widely regarded as a fabricated case; officials sell out the Russian environment for profits, especially if the buyer is China; plus, we finally have the results from the water samples we collected at the sight of Arctic’s largest fuel spill in history.

Inside the Khabarovsk Uprising

Khabarovsk has been protesting the arrest of critical of Moscow governor Sergei Furgal for a month now. In his place, Putin installed Mikhail Degtyarev, a Moscow-based deputy from the same semi-opposition party. But the appointment failed to quell the uprising. We traveled to the region to speak to locals about Furgal’s legacy and the new acting governor.

HOUSING HOPES DASHED. In the very center of Khabarovsk stand emergency barracks, where people live without water and share an outside toilet. Locals say under Furgal, who earned himself the title of ‘the people's governor,’ the process of resettling residents into apartments started. Now with the former governor under arrest, they feel they have no chance of resettlement. In April, one of the houses collapsed. After that, Furgal launched a transfer of the affected folks to new apartments for free. But after his arrest, the city backpedaled on the plan.

“WHEN FURGAL WAS ELECTED, THERE WAS HOPE. He took up the situation with the barracks. He scolded the city administration: why haven't you resettled those living in the barracks in all these years? Orphans live on the other side of the wall. They say that under Furgal they began to give out apartments somehow,” says Tamara, a resident of the barracks. “Nobody cared about us before.”

“When we turned to the city administration, someone put it that way,” Tamara later recalled. “They said that there is no need for resettlement, only drug addicts and drunkards live here anyway. But people who live here are normal. They’re all working people and pensioners. Working pensioners. They are just poor.”

KREMLIN’S REAL PRIORITIES. When Degtyarev arrived in Khabarovsk to take office as acting governor, he was greeted by mass protests. But Degtyarev did not stay at the rally. Instead, he traveled 500 kilometers out of Khabarovsk to the village of Vanino. We found it weird and followed the newly appointed official there too.

WE ARE FURGAL. Unlike in Khabarovsk, there are no anti-Putin slogans here, but locals don’t hide their disappointment with his position or displeasure with the situation. On weekends, residents organize their protest, and cars take off in the direction of Khabarovsk. In the early days of the demonstrations, locals say about a hundred cars with flags and slogans proclaiming "We Are Furgal" would head down. One local told us police issue warnings to those who take part in the actions.

CLASH OVER COAL TERMINAL. It turns out that the large-scale construction of a controversial coal terminal was starting nearby the village. Locals say existing coal terminals have already wreaked havoc on the local sea life. Just weeks before his arrest, Furgal was captured on video, putting up a fight against the development, which started without the green light from regional authorities. Construction work quickly resumed after Furgal’s arrest.

“We are categorically against the construction of a coal terminal there,” Furgal told a ministerial meeting before his arrest. “We should think first of all about the people who live there, and then about coal and everything else. Because everything we do, we do for the people. At least, that’s the way it should be. So we do not need any coal terminals there."

BACK IN BUSINESS. Degtyarev instructed authorities to check the construction procedure but didn’t speak out against the project like Furgal. And despite these instructions to investigate, dozens of trees have already been cut down near the cape.

BACKSTORY. Many of Russia’s regions are rich in oil, gas, coal, and other resources, which Moscow uses to fill its pockets. Authorities often strip regional communities from valuable resources or treat them as storage facilities for environmentally harmful materials while failing to divvy up the profits fairly. Revenue often primarily feeds Moscow’s budget, with regions only receiving scraps while bearing the brunt of the damage.

Read the full story of the plight of the residents in emergency barracks here and on the new interim governor here.

The Case Against a Group of Putin Critics, Explained

In an ongoing crackdown against opposition voices, a Moscow court has found members of an online group guilty of creating ‘an extremist community.’ This month, the court handed down six to seven-year jail sentences to three of its members, while another four others received suspended prison time. The case is widely regarded as fabricated by Russia’s security services.

REAL PRISON TERMS FOR A VIRTUAL GROUP. Originally named “The Plant Lovers Club,” the group started on Telegram, discussing life, shared interests, and political views. The participants then renamed it to "New Greatness," and shifted the meetings offline after another member, Ruslan Danilov, joined the group. The arrests started in 2018, with members accused of trying to overthrow the Putin regime.

THE PROSECUTION’S CASE. The prosecution believes that the group took part in protests where they distributed anti-Putin flyers, held training camps, shot at paper targets, and threw Molotov cocktails at an abandoned factory. According to the prosecution, the young activists were going to seize power in Russia through a coup d'etat and change the constitutional order.

PROVOCATEUR. The case is built on the testimony of just one witness. It is Ruslan Danilov, who defendants say was behind the organization. According to them, Danilov wrote political documents for the movement, prepared propaganda leaflets, and offered to buy weapons. The defendants are sure that he is ‘a provocateur’ working for Russia’s special services. Furthermore, at least two law enforcement officers were embedded into the group on the authorities’ instructions even before a criminal case was initiated.

INCONSISTENCIES IGNORED BY THE COURT. The defense has no doubts that the charges brought against the group are legally absurd and untenable. The case has many discrepancies. Take the lease for their meeting space. The rent costs paid by Danilov significantly exceeded the amount collected through membership fees and came from a different name. But the court failed to address the gaps.

ARREST AND TORTURE. All participants of the group were arrested. They reported not only falsification of evidence but also torture — a common practice for the Russian law-enforcement. One of the defendants, Ruslan Kostylenkov, said on the day of his arrest, he was beaten, had drugs planted on him, and was forced to record false confessions.

PUBLIC BACKLASH. The case sparked a public outcry, prompting demonstrations in support of the defendants and appeals from famous names. On the day of the sentencing, some 200 people gathered outside the Moscow court. As the judge read the guilty verdict, the crowd outside chanted: ‘innocent.’

BACKSTORY. Russian authorities have a track record of using bogus criminal charges to silence opponents and police aren’t shy about using brutal methods during arrest. Since the rigged constitutional vote last month, critics have sounded alarm bells over an intensified crackdown on opposition voices. Just last month, a former defense reporter was charged with state treason, and a revered regional governor has been arrested on 15-year-old murder charges.

Read the full story on the case against the New Greatness here and here.

How Russia Sells its Forests To China

Environmental degradation across Russia remains one of the key focuses for our reporters. This week we uncover how authorities are cutting down healthy forests in a Siberian region of Tomsk under the guise of sanitary felling and selling the Karegodsky reserve to China.

NEGLECTED BY AUTHORITIES FOR YEARS. In 2012, unprecedented fires enveloped nearly 300,000 hectares of Siberian forest, spreading across the territory of the local Karegodsky nature reserve. Local rangers urged the authorities to carry out sanitary felling of the scorched forest, but they wouldn’t do it for years. Then suddenly the trees started coming down. Hunting expert Vladimir Rogoev believes there’s no point in mass felling now. But authorities have found a reason: commerce.

NOW OFFICIALS ARE CUTTING THE TREES AND LYING ABOUT IT. According to our assessment, 75% of the trees affected by the works area were alive and didn’t need sanitary felling. But that would make the opposite of the picture provided by the officials. They claim that upwards of 70 percent of trees on their logging to-list are dead or dying.

FOLLOW CHINESE BUYERS. The buyers of the Siberian forest are Chinese companies. China banned industrial logging in wild forests, especially in mountainous areas, in 1999. But it makes up for the lack of wood through export.

VIOLATION OF THE FOREST CODE. Mikhail Kreindlin from Greenpeace says that responsibility for what is happening in the Karegodsky reserve lies not with the foresters but with the regional authorities. “The first thing that needs to be said is that this is a state nature reserve, a specially protected natural area,” he said. “At the same time, forests are still considered exploitable here, which is a direct violation of the Federal Forest Code by the Tomsk region authorities.”

BUSINESS LINKS. Documents indicated that felling in the Karegodsky reserve is carried out by IntelStroy, a private company founded by Tomsk businessman Valentin Shirokov. Shirokov is the former business partner of Artem Konev, head of the Forestry Department.

BACKSTORY. For some time now, the Kremlin has been stripping away environmental protections amid severe ecological degradation taking place across Russia. Last month, for example, Russia scrapped protection for the territories surrounding the UNESCO World Heritage-listed Lake Baikal in the Siberian region. Russians are now fighting back. A pushback against the construction of Europe’s biggest landfill at the Shiyes station is touted as “ground zero” for the eco-protests and has inspired others.

Read the full story on Russia’s felling of healthy trees for profit here.