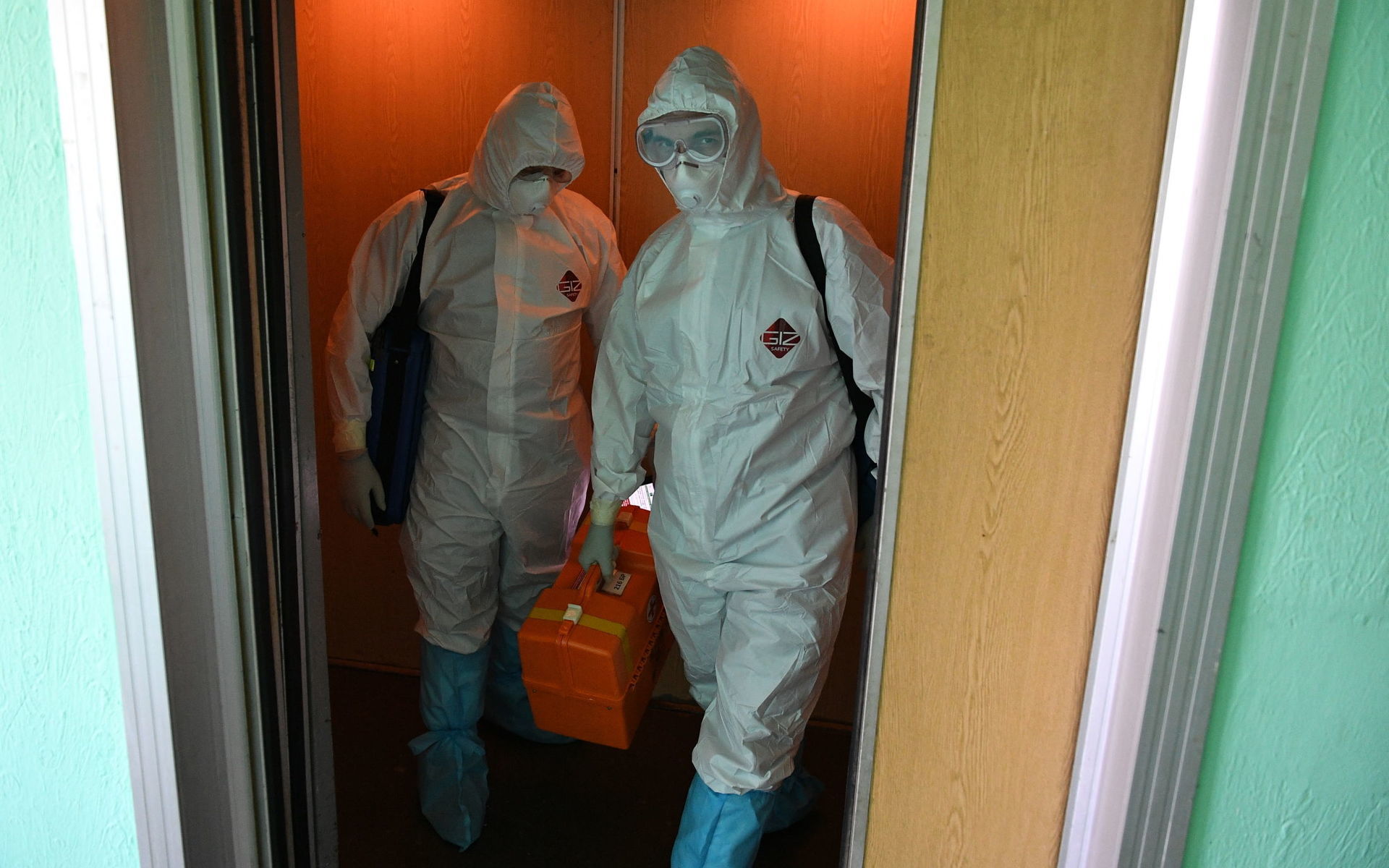 We follow Russian mercenaries detained in Belarus while this neighboring country is experiencing a pro-democracy uprising; how to spot a second Covid-19 wave when the state falsifies the statistics —  our data unit has found the way; Crimea’s Muslim community devastated by the death of political prisoner’s toddler son — we investigate the role of the authorities; plus, we talk to an indigenous spiritual leader whose crusade against Putin made global headlines, but fizzled out after numerous arrests and forced treatment at a mental asylum.

What Are Russian ‘Wagner’ Mercenaries Doing In Belarus?

First spotted in Eastern Ukraine, Syria, Libya, and across Africa, now they are ‘parachuted’ to the epicenter of a massive Eastern European pro-democracy uprising. Belarus detains 33 men believed to be part of Russia’s infamous private military Wagner group. Belarusian officials claim the fighters came to ‘destabilize the situation’ in the country in the lead up to the August 9 presidential election. But since the local authoritarian regime battles the unprecedented protest wave against the 25-year tyrannical rule of Alexander Lukashenko, there’s broad skepticism about the official version of events. It is messy, shady, but we’ve got you covered.

WHO ARE THE DETAINEES? Open-source evidence shows that the men are indeed part of the Putin-linked Wagner paramilitary group, with combat experience in Donbas and Syria. Most are Russian citizens, but 9 are Ukrainian citizens, and one Belarusian.

‘DESTABILIZATION’ SCENARIO IS UNLIKELY. Suppose you examine the group’s work in other countries. In that case, this incident doesn’t look like a part of a well-organized operation. The group lacked usual backup from political strategists or specialists but was simply a bunch of infantry platoon men. Even if they showed dexterity and fighting spirit, a single platoon would be doomed to confront the Belarusian army.

‘IN-TRANSIT’ LOOKS MORE LIKELY. Referring to sources in the Russian special service, a prominent Russian military correspondent Semyon Pegov claims that it is common for Wagner to use Belarus as a transit route during the pandemic. Russia closed its borders and stopped most of its international flights as it went into lockdown. Still, Belarus has kept its borders open, which means it might be easier to organize trips through Minsk. This wouldn’t be the first time “soldiers of fortune” have used Belarus as a transit route.

RUSSIA’S RESPONSE. Russia denies the existence of the officially unregistered private military company. It has said the detainees are employees of some other private security company. Russian consul Kiril Pletnev noted that the men were going to Latin America via Minsk and Istanbul.

INCONSISTENCIES ALL AROUND. Belarus authorities say the men aroused suspicion because although they had tickets to Istanbul, they gave “inconsistent testimony.” But the ‘caught by surprise’ attitude of Belarusian authorities seems disingenuous. The sanatorium where the group camped before getting detained belongs to the Federation of Trade Unions, headed by the man leading Lukashenko’s election headquarters.

FOLLOW OPPORTUNISM. Whether or not Lukashenko knew about the fighters in advance, he could have used their presence to his advantage. Waves of anti-Lukashenko demonstrations have swept the country in recent weeks after the authoritarian ruler eliminated two opposition candidates from the presidential race. With unprecedented crowds cheering on his new opposition, a female troika headed by Svetlana Tikhanovskaya, Lukashenko, feels the heat. He probably wanted to use this as an excuse to postpone or cancel the election under the precedent of a ‘threat’ — but eventually failed to scare the public enough.

STAGED PERFORMANCE. Of course, this ‘special operation’ is a performance but not for the locals. It’s for the West, thinks our correspondent in Minsk Iryna Khalip. It is designed to stir up fears of “little green men” advancing on Belarus (parallel with the Crimean annexation during the Ukrainian pro-democracy revolution of 2014.) The idea behind the performance is that it forces the West to prioritize security and recognize Lukashenko as the only guarantor of stability at Europe’s border with Russia. Judging from Western commentary over the incident last week — it was a good bet for Lukashenko.

Read the full story on the detained Russian mercenaries in Belarus here and the op-ed by Iryna Khalip here.

Russia has one of the largest Covid-19 outbreaks globally, with thousands of new cases recorded daily. Officially, infections have been on the decline. We’ve previously reported on just how unreliable Russia’s official Covid statistics are. This week we look at whether Russia should expect a second wave and how to spot an outbreak even when official statistics don’t show it.

MOSCOW SEES JUMP IN NEW CASES. Covid-19 cases are on the rise again in Moscow, formerly the epicenter of the epidemic. In the last two weeks of July, case numbers have grown by more than 30%, jumping to 694 on July 27. Analysts have noted the worsening situation but say it’s too early to call it a second wave.

THE VIRUS SPREADS UNEVENLY ACROSS RUSSIA. Russian officials deploy the ‘more testing means more cases’ excuse — similar to that fancied by other governments failing at containing the outbreak. But virologist Pavel Volchkov believes the increase in the number of cases is due to people returning to Moscow from other regions where the epidemic has not yet subsided.  Around a third of Russia’s regions are seeing case numbers climbing too. But most are still in the midst of the first wave.

GOOGLING IS BETTER INDICATOR THAN OFFICIAL DATA. Official statistics aren’t always reliable indicators of the situation — we have found relatively reliable data in only about 10 regions, most of them with low rates of infection. So our data analysis unit looked at other indicators to assess the severity of the epidemic. For example, whether the number of online searches for coronavirus-related symptoms has risen. We spotted the spike in more than a dozen regions over the past week. Official statistics fail to show an outbreak in half of the regions where search results indicate there is one.

SECOND WAVE? Experts note that due to the uneven spread of the virus and the partially formed herd immunity, Russia is unlikely to face a massive second wave. Still, the number of localized outbreaks may continue to grow. They widely occur in resort regions, which experts say increases the risk of further community spread.

“We can recall that the March epidemic in Europe was largely because people from Northern Europe went to Italy to ski ...The conditional second wave, or rather, a new cycle of local flares, may turn out to be even longer in time than the first wave,” says Data Insight agency research director Boris Ovchinnikov.

Read the full story on whether Russia should brace itself for a second Covid-19 wave here.

The death of three-year-old Musa Suleymanov devastated the Crimean community. The toddler was found dead in a drain pit near his home in the village of Strohanivka after going missing two days earlier. Musa’s father, Ruslan Suleymanov, is currently a Crimean Tatar activist in pre-trial detention on what human rights groups say are politically motivated terrorism charges.

LOCALS BLAME RUSSIAN AUTHORITIES. During the search for the missing child, police interrogated the family. They forced the mother to undergo a polygraph test, accusing the family, including Suleymanov, of being responsible for Musa’s disappearance. Thousands of Crimeans attended Musa’s funeral, but his father wasn’t allowed to say goodbye to his son. Authorities refused to release Suleymanov for the burial. Musa’s death may have been accidental, but many place the blame on Russian authorities.

“Why is Russia responsible for the tragedies that take place in Crimea? Because the crime, which began from the moment of Crimea’s occupation six years ago, continues to this day ... Today, there are about a hundred of our political prisoners in detention. Their children are left without a father, and the mother takes care of them alone. Therefore, it is the criminal occupation authorities’ responsibility,” says former political prisoner Akhtem Chiygoz.

POLITICALLY MOTIVATED CHARGES. Suleymanov was arrested last year after Russia’s security services raided his family home in Russia-annexed Crimea. Suleymanov is currently in a detention center in Simferopol. He is one of more than 60 Muslims arrested in Crimea since 2014 on politically motivated charges related to Hizb ut-Tahrir. This pan-Islamic organization was banned as a terrorist group by Russia in 2003.

NO EVIDENCE. Investigators claim that Suleymanov, together with four other Crimean Muslims, organized the Simferopol cell of Hizb ut-Tahrir. But their primary evidence of involvement is wiretap recordings, planted by Russia’s security services. Evidence of terrorist activities doesn’t feature in the investigation at all.

REPRESSION TACTIC. Human rights groups say Russia has portrayed as terrorists politically active Crimean Tatars and Muslims, who continue their peaceful resistance to the annexation. Persecuting Crimean Tatars and Muslims as part of Hizb ut-Tahrir became a popular tool for authorities to suppress the dissent. They use numerous tactics to silence and intimidate Crimean Muslims, including arrests, home raids, and enforced disappearances.

UPPING THE PUNISHMENT. Russian authorities have been increasing the punishment for Hizb ut-Tahrir cases over the years. Some of the first Crimean Muslims arrested in 2015 have already serviced their sentence. They have been allowed to return home under administrative supervision. Some of the more recent sentences have been upward of 12 years. Suleymanov is facing up to life imprisonment.

BACKSTORY. Crimean Tatars are the indigenous population of Crimea. They have been turned into a local minority over the hundreds of years of Russian colonialism. During the Soviet rule, the entire population was deported to Central Asia - by some estimates, over 100,000 or half of the nation died as a result. Russian settlers expropriated their lands. In the 1990s, Crimean Tatars were allowed to come back but now face increased discrimination and repressions as vocal opponents of the Russian annexation of Crimea in 2014.