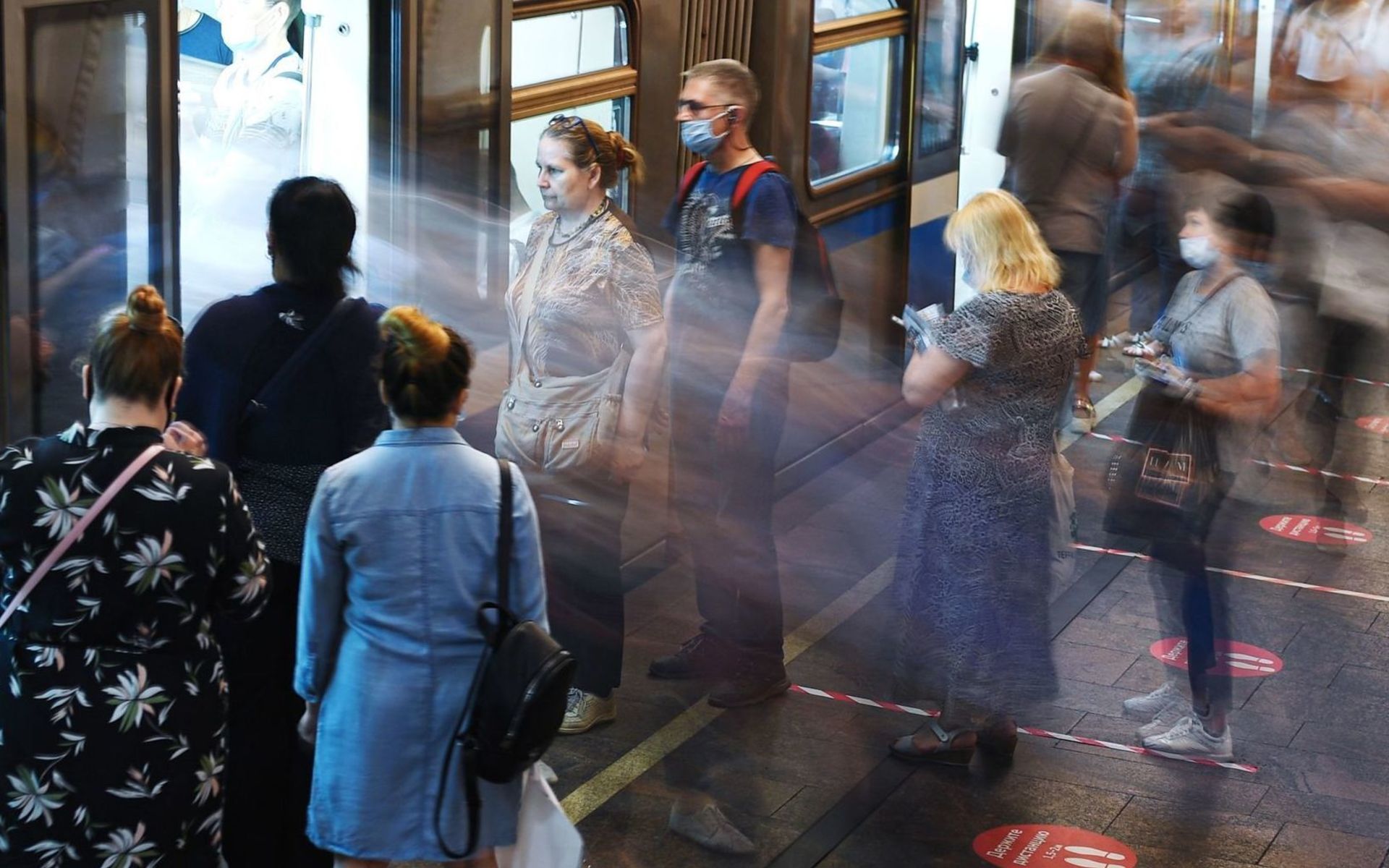 We track the Arctic's biggest fuel spill and fact-check whether climate change was really to blame; the Kremlin decides to downplay health risks and pushes for a key constitutional referendum amid severe Covid-19 crisis; plus, the ‘ground zero’ of Russia’s environmental uprising celebrates a rare victory.

Who’s Responsible for the Environmental Disaster in the Russian Arctic?

Last month, 20,000 tons of diesel fuel spilled from a damaged power station in the Siberian city of Norilsk, poisoning nearby rivers and drifting towards the Arctic Ocean. Russian mining giant Nornickel, which owns the plant, blamed climate change for the disaster. Its owner Vladimir Potanin thinks that permafrost thaw could have caused the spill. But environmental activists on the ground tell us that this is the latest example of negligence by the company, which is seeking to whitewash its irresponsibility.

First, Nornickel is not capable of analyzing the effects of climate change. The company doesn’t have a sufficient monitoring system and has never bothered to install it. The thawing permafrost crisis has been on the radar for the last twenty years and there are tools to predict soil movements affected by it, but Nornickel didn’t use them, Greenpeace Russia’s campaign director Ivan Blokov tells us. He believes that the entire disaster could have been avoided if the government forced the mining giant to comply with safety regulations.

“The catastrophe could have easily been avoided. If the state supervisory services worked properly and if they didn’t allow facilities which don’t comply with safety rules to operate and also took into account the possibility of permafrost, then everything could have been easily replaced in a timely manner,” Blokov says.

Second, permafrost is not at fault. Zhanna Petukhova, director of the Arctic Permafrost Research Center, says the power plant tanks stand on piles, which lean against a rock base — not permafrost. This means that depreciation of the Soviet-built equipment is a much more likely cause of the oil spill.

Third, Nornickel ignored the warning signs. The Nornickel management says the spill was “completely unexpected”. But documents obtained by Novaya Gazeta show that in 2016 the company ordered an upgrade of the emergency system at the powerplant. Nornickel was aware that the tanks were defective due to wear and tear. But in 2018 the company scrapped a $10 million upgrade of the oil storage facilities.

Five people are arrested in connection with the spill. They include power plant director Pavel Smirnov, chief engineer Aleksey Stepanov, his deputy Yuri Kuznetsov and Norilsk mayor Rinat Akhmetshin, who has close ties to Potanin. One of the arrested managers, Vyacheslav Starostin, worked at the plant for less than six months. Local environmental activists point out that the fuel spill is rooted in decades of negligence, so these arrests are simply scapegoats for the disaster.

What’s with the cleanup? At first local authorities considered simply collecting the fuel and burning it off, our correspondent Tatyana Britskaya says. And Nornickel was right behind the idea because, well, it’s cheap. But environmental activists managed to shut the idea down because it would have catastrophic environmental consequences. For now, the clean up consists of collecting the fuel from the river.

The price tag for the disaster. Nornickel has pledged to fork out around $146.5 million for the clean up bill. But it’s also awaiting a fine for the damages from Russia’s natural resources watchdog Rosprirodnadzor. As we reported last week, there are concerns over a fair investigation and the state doesn’t have a good track of penalizing Nornickel: it got a $144 fine for a similar, but smaller accident three years ago.

Wonder if the cleanup will be a success? Our correspondents advise to look no further than Norilsk the city next to the epicenter of the spill. It is one the dirtiest in Russia, shrouded in pollution and prone to industrial accidents. Nornickel employs most of the local citizens, but puts minimum investments into the surrounding infrastructure. During the company’s 20 years in the region, it has built only three buildings here.

Listen to our podcast detailing the aftermath of the environmental catastrophe here and read the full story on how Nornickel failed to prevent the disaster here.

Even with flawed data, Russia reports three times more daily Covid-19 deaths per million and three and a half times more confirmed cases per million than the rest of the world. Thousands of new infections are detected in Russia daily, with the country’s capital being the outbreak’s ‘ground zero.’ Yet, Mayor Sergei Sobyanin reopened Moscow for business last week as Kremlin politics trumped healthcare concerns.

Putin’s constitutional referendum instead of a Covid-19 vaccine. ‘The second Putin announced the upcoming date (July 1st) for his constitutional referendum, the virus has ‘disappeared,’’ our columnist Yulia Latynina sarcastically points out in this week’s op-ed. She thinks that Russian authorities occupied with artificially bringing down Covid-19 statistics and waging a war on the truth are all part of the concerted effort to push for a final stage of Putin’s power grab — disregarding the costs.

Last Covid-19 dissent is squashed. Latynina also points out that premature quarantine rollback marks the victory of politics over health concerns. In the last months, Kremlin-backed Moscow Mayor Sobyanin emerged as a surprising voice of reason regarding the pandemic — sounding the alarm at early outbreak stages, exposing flawed statistics, and calling the government to act. But no more. It took the Kremlin several months to get the act together and put out any internal dissent regarding the official Covid-19 narrative.

What’s with that weird military parade in Moscow? Despite health concerns, the authorities plan a massive display of military might on June 24th. Officially it is linked to postponed annual festivities celebrating the end of WWII. In reality, they are designed to boost patriotic feelings in the wake of the upcoming vote — the old tactic that always benefited Putin’s (now sinking) ratings before.

Not all governors are happy about it. 10 Russian regional leaders refuse to put on the festivities. In this week’s column our political editor Kirill Martynov explains that this is not a health-related dissent, but rather an issue of a struggling regional budget amid the worst economic crisis in two decades. Usually Russian governors have little say in a highly centralized power vertical. However, this time is different — the Kremlin earlier offloaded the Covid-19 management to regions so it doesn’t get blamed for a botched response.

“It’s frightening to imagine how much could have been saved on these projects, coming from the centre, in a situation where the country would have had real federalism and not coronavirus federalism,” Martynov writes.

Patriotic bravado and vote buying in a package deal. Unlike his regional counterparts, Sobyanin is not allowed an option of canceling the main parade in Moscow. Albeit, he encourages Muscovites to stay home and watch it on television. There’s also a bonus — a chance to win one of two million gift certificates, totalling $143 million, for stores, restaurants and other services. The offer’s timing just a week before the referendum is not a coincidence.

Post-parade consequences. Russia has not yet flattened the curve, but experts are already predicting the festivities leading up to the vote will trigger a second wave. Medical personnel in Moscow informed us that the government has already blocked 2,000 additional hospital beds for the military men participating in the parade.

“The question is not whether there will or won’t be a second wave, but how high and manageable it will be… Removing restrictions and everything that’s happening around the parade is the most dangerous — the parade itself is only one of the risks,” Alexey Maschan, Deputy Director of a Moscow-based children’s hospital, said in an interview to Novaya Gazeta.

Read the full story on why the Moscow Mayor cancelled quarantine here, read Kirill Martynov piece on  how regional authorities are refusing to stage a parade here and what health experts have to say about it all here.

For two years, environmental activists have been protesting the construction of Europe’s biggest landfill at the Shiyes station in northern Russia. This month the Arkhangelsk authorities dropped their support for the landfill and terminated the contract with developer Tekhnopark LLC due to ‘an absence of construction work.’ The move is hailed as a win. But it may turn out to be short-lived.

Caution sign #1: it may be a temporary election trick. The timing comes just months from local elections scheduled for September. Local governor Alexander Tsybulsky hopes to retain his seat and doesn’t want additional confrontations with the public that is already on the edge due to the pandemic, collapsed oil prices (the regional budget depends on oil revenues) and unpopular merger with neighboring Republic of Komi and Nenets Autonomous District.

Caution sign #2: the issue is not scrapped completely. The controversial project is removed from the registry of government investment priorities. But it is not closed. The Kremlin-backed deadline for the Shiyes conflict resolution is now also pushed after the election day in September. Moreover, authorities haven’t acknowledged illegal construction, ecological risks or the concerns of the local population. Their reason for the termination of the contract is just the lack of work on the project. So we’ll be watching the space for more.

Caution sign #3: the builders are still on site. Furthermore, the builders and security guards still remain at the Shiyes as does the protest camp. Neither side is planning on leaving. This suggests that the battle is far from over.

Backstory. In 2018, Moscow and the Arkhangelsk region reached the agreement to build a landfill in Shiyes, which would take 500 thousand tons of garbage from the Russian capital annually. The developer, Tekhnopark LLC, didn’t have the necessary documents and environmental assessments but authorities began to prepare for construction regardless. In response, locals rebelled with pickets, rallies and turned the construction site into a permanent commune. The Shiyes station is touted as “ground zero” for the protests against the severe environmental degradation taking place across the Russian provinces and in the far-north.

Read the full story on the authorities dropping support for the landfill here.