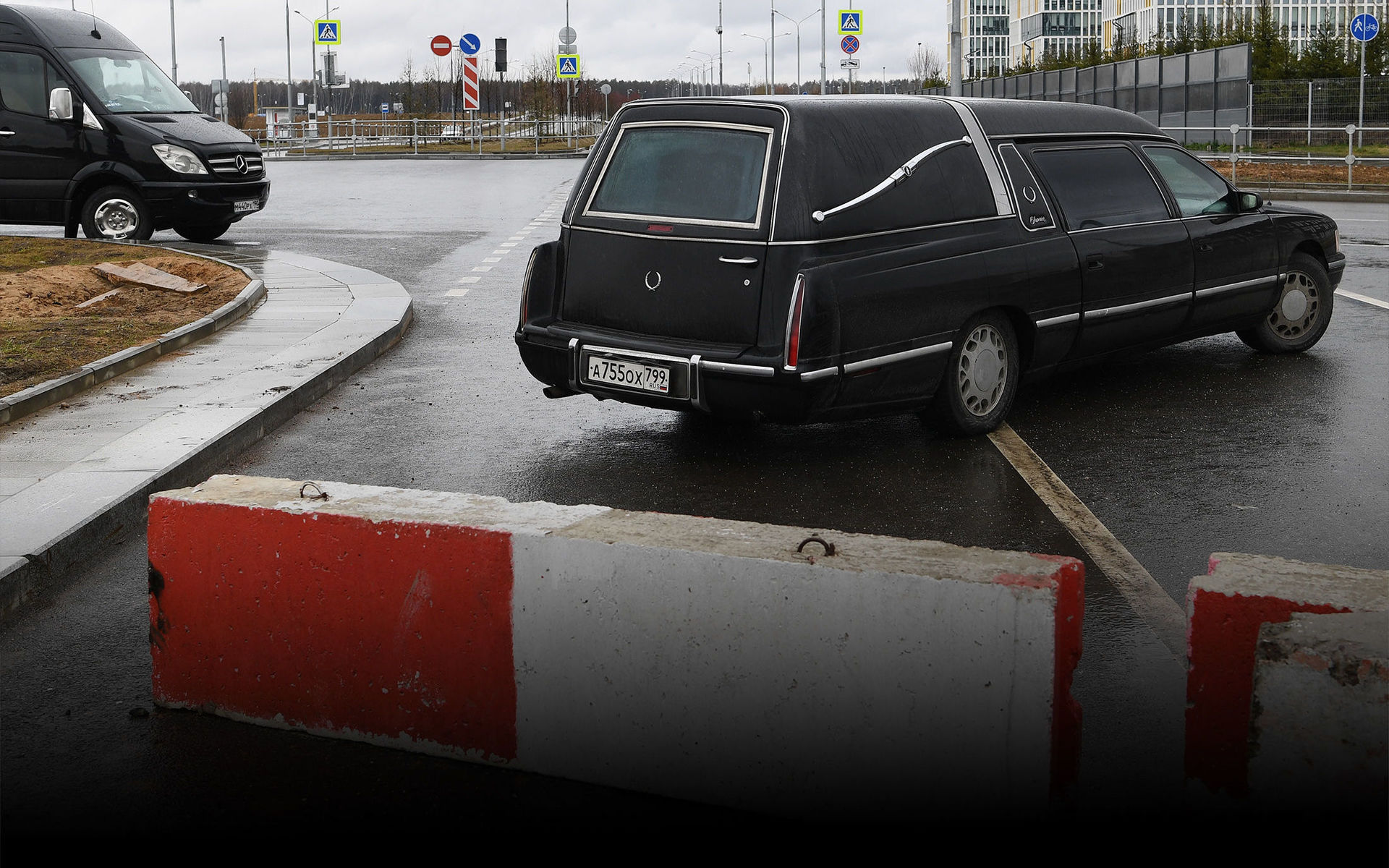 Covid-19 stats fail — Jail for a like — Remote voting gambit

Our new investigation looks into Moscow’s death toll spike and how it exposes Russia’s real COVID-19 mortality rate; frontline health care workers are getting just a fraction of the promised health care bonuses - and some are getting pay cuts; another Russian activist faces jail time for social media posts; plus, a new online voting law sparks election fraud concerns, and our columnist looks at how state television utilizes propaganda to distract Russians from the outbreak disaster.

With Russia now having the second-highest number of COVID-19 cases in the world (over 281,000 infections and 2,631 deaths), few believe the official count. We’ve examined over a decade of data from Moscow’s municipal registry office and spoke with independent experts for our latest data journalism investigation. It exposes Russian officials severely underreporting the coronavirus death toll.

Unrealistically low mortality rate. Officially, Russia’s death rate is just 0.9% - significantly lower than that of other countries with similarly large Covid-19 outbreaks. According to official figures, every fourth death is registered in the country’s capital of Moscow, the epicenter of the epidemic. Data from the capital’s registry office shows a 19% spike in deaths recorded last month, meaning Moscow’s coronavirus death toll could be three times higher than officially.

How did we calculate this? We used state data from 2006 to 2019 to calculate the average monthly mortality rate and cross-checked it with a recent death rate. According to our estimates, the average number of deaths for any April is 9,991; instead, 11,846 were recorded last month.

There is more death than reported. Russia only attributes the fatality to COVID-19 if a patient died directly from the infection. This is in contrast to the US, for example, which tallies the deaths of everyone who tested positive for coronavirus. Tatyana Mikhailova, an associate professor at the Russian Presidential Academy of National Economy, told us that the additional fatalities could be attributed to coronavirus.

“Because all medical resources have now been mobilized to fight the epidemic, it may be difficult for many people to get medical help for other diseases or get an ambulance. Such people will also be among the unaccounted deaths.”

Why the numbers don’t add up. A former Russian Federal State Statistics Service employee told us that the situation had deteriorated in May when Putin ordered regions to fight the outbreak better and, therefore, lower mortality rates from Covid-19 complications. But since there’s a long history of authorities manipulating statistics to please the Kremlin, nobody can establish a realistic baseline for what is a ‘better’ or ‘worse’ mortality rate. It means it is easier for officials to fix the data, rather than trying to accomplish unrealistic goals.

Russian journalists reporting on true mortality rate face up to five years in jail. That if officials, empowered by a recent law, decide to label their stories as virus-related “fake news.” The state has already accused many Russian independent newsrooms, including ours, of ‘spinning false narratives’ based on interviews with anonymous sources. Our editors face fines of $8000. Foreign newsrooms also get threats  —  similar reporting on distorted coronavirus data by Financial Times and The New York Times faces online censorship inside the country. At the same time, lawmakers call for the reporters to be stripped of their accreditation to report in Russia.

Wait, there’s more.  Russian officials may be counting Covid-19 deaths poorly, but they don’t count victims separately among healthcare workers at all. To illustrate how bad things are, we traveled to one of the largest hospitals near Moscow, where officials try to conceal three coronavirus deaths and many more infections among the staff. Medical workers deal with a severe shortage of resources, while the administration bans donations from volunteers.

“At the beginning of the epidemic, hospital staff had no protection whatsoever, only disposable masks. Personal protective equipment began to arrive in late April. These measures were belated: many employees were already sick by this point. A doctor died,” said the anonymous doctor who tipped off Novaya Gazeta.

Last month President Vladimir Putin promised all healthcare workers on the frontline of the COVID-19 pandemic would receive bonuses, ranging from 25,000 rubles (around $340) to 80,000 rubles (around $1100). On top of that, some regional authorities promised their own incentives for the “heroes among us.” But when medical personnel received their paychecks this month, many were in for a shock. We talked to some of them.

For some, a ‘bonus’ turned out to be a paycheck cut. Svetlana Munirova is an otolaryngologist at a hospital in the country’s second-largest city of St Petersburg with a salary of 50,336 rubles (about $690). In April, her paycheck was slashed by more than $82. This is because her hospital was repurposed to work with coronavirus patients. She was reclassified from a surgeon to an infectious disease specialist, who receives a smaller salary.

Now you see a bonus, now you don’t. Last month Munirova’s hospital was placed under quarantine after several patients were diagnosed with coronavirus. The staff locked inside were forced to work 24-hour shifts for two weeks straight. An anesthesiologist-resuscitator, who spoke to Novaya Gazeta on anonymity, said that usually, so much overtime would double his paycheck (around $700). But he got paid precisely the same. Meanwhile, his colleague, a cardiac surgeon undergoing a forced quarantine at home after coming in contact with a COVID-19 patient, received only half of his usual salary.

For others, a ‘bonus’ was more of a symbolic concept. In Murmansk, a city in Russia’s northwest and one of the country’s top 10 COVID-19 hotspots, authorities promised salary increases of up to 90% for frontline medics. The devil was in the details, and officials decided to calculate the bonus based on vague ‘time spent with an infected patient’ instead of a monthly salary. As a result, some received bonuses worth barely about 30 cents.

Backstory. The average doctor’s salary in Russia is 80,000 rubles (around $1,200) while other medical personnel average 40,000 rubles (around $600) a month. Meanwhile, junior staff and cleaners earn as little 12,000 rubles (around $170). Russia’s healthcare system has been stretched thin throughout the pandemic, with shortages of personal protective equipment putting medics in danger and a lack of specialists forcing many to step into new roles quickly.

President Putin was in the middle of extending his rule until 2036 when the pandemic hit. Now he is short of a formality — a referendum, which has been, at first, postponed to late June due to COVID-19. But now no one knows how long quarantine will last, so the Kremlin pushes for remote voting, instead.

Election fraud concerns. The lower chamber of the Russian parliament has already approved new legislation that would allow citizens to vote via mail and online. Opposition lawmakers say that both postal and electronic voting opens up the door to electoral rigging. The parliament is in Putin's full control, so the upper chamber is expected to sign off on the bill very soon.

Remote voting has been mishandled before. An opposition MP from ‘Just Russia’ Oleg Shein says electronic voting puts the secrecy of the vote at risk and could allow employers to pressure their workers into voting a certain way while they stand behind them watching. Furthermore, when Russia used online voting for the first time last year for the Moscow City Council elections, personal data of online voters leaked soon after.

Why is Putin pushing for it? It is simple — falling ratings. Recent polls suggest his approval rating fell to 59% (one of the lowest in the two-decade rule) due to the botched Covid-19 response. This bill is among several changes that lawmakers have introduced to skew the vote in Putin’s favor - including the expansion of police powers and an anti-crisis stimulus. “This allows for falsification, this will quash protests and butter the population up before the vote,” argues Andrei Kolesnikov of Carnegie Moscow Center. Political scientist Dmitry Oreshkin says given that poor economic conditions will likely remain for the coming year, chances of reelection for all MPs aren’t looking good.

“That’s why they’re trying to create conditions for themselves, under which with the help of the usual methods of falsification, they can ensure reelection. They understand that in a fair battle, they are unlikely to keep their place. This isn’t only about State Duma elections but also voting on the constitutional amendments.”

Backstory. Putin’s presidential term was set to end in 2024. Still, in a bid to cling on to his power, he announced sweeping constitutional changes this year that would reset his presidential term. Although the legitimacy of Russia's elections has long been scrutinized as is, authorities are not above manipulating legal processes to safeguard their power.

Read the full story on the remove voting law here.