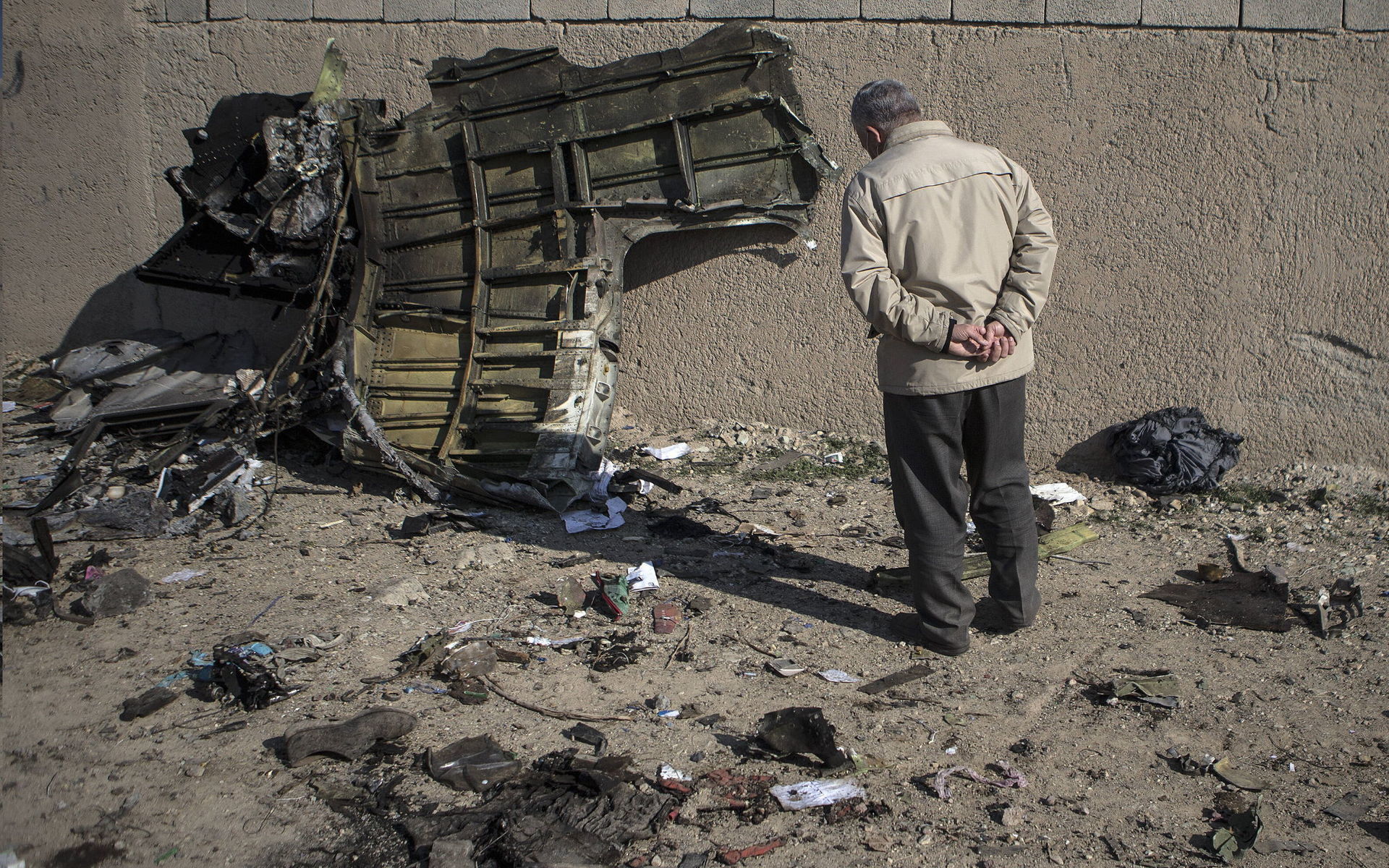 A Russian missile system was used to down the Ukrainian passenger plane in Tehran — we talk to one of its creators. Plus, environmental activism in northern Russia inspires anti-landfill protesters in the South, high-profile cases shed light on the widespread use of torture in the Russian criminal justice system and a suspicious death sparks a popular protest in Omsk.

A Missile Systems Expert on the Plane Downed in Iran

Iran claims that they launched a missile from a Russian-produced Tor anti-aircraft missile system at the Ukrainian passenger plane because they mistook it for a cruise missile. But it turns out this is another lie. We asked Tor missile systems developer Andrei Gorbachevsky to fact check the official Iranian version of the events.

Lies, lies and more lies. The Ukrainian Airlines flight from Tehran to Kyiv was a regular one and it would have been recorded in the country’s air defense system as passing through an allocated corridor: “this alone should have shown [the commander] that there is a civilian airliner in front of him, not some American drone,” Gorbachevsky explains. Tor anti-aircraft missile systems also have two locators, which continuously survey everything around them. Gorbachevsky estimates that the locator would have picked up the plane within twenty seconds of its takeoff from the airport in Tehran. The plane was in the air for six minutes: “from the very beginning of the flight, it was clear where it took off from,” Gorbachevsky says.

“Collapse of Iran’s air defense”. “I can’t remember a more serious mistake in the history of air defense,” Gorbachevsky says. He calls the Iranian explanation “a purely political statement” and thinks that  “Iran wants to hide the degree of the collapse of its air defense.” Another sign of colossal incompetence is that Iran actually launched two missiles – an action that is usually only taken when a guaranteed hit on a military target is needed. “No one would launch two rockets at a civilian plane, when one is enough to destroy it,” Gorbachevsky explains.

In the aftermath of the plane crash in Tehran, Russian state media initially sided with Iran and propagated their dishonest narrative. Top “experts” from Russia Today and other state propaganda outlets were deployed to spread more lies than the culprits themselves. “Between truth and propaganda, Russian media chooses the latter,” writes Novaya Gazeta columnist Kirill Martynov. “Russian propaganda did not take into account that hiding the destruction of an airplane is simply impossible in 2020.”

The post-truth era is ending. Rather than standing by their original false narrative, the authorities in Iran chose to plead guilty. Nevertheless, Martynov feels that they simply couldn’t do otherwise. “Recognizing the truth in a world where hiding it won’t work anyway eases your fate,” he says. “By 2020, we have started to develop an antidote to the white noise of propaganda; attempts to deceive all of humanity look naive and amateur.” Martynov hopes that Iran acknowledging its responsibility “marks the end of the post-truth era” – because “ journalists and experts will get to the truth, no matter how many fakes.”

But the Kremlin didn’t get a memo. While Iran’s leaders may have realized the importance of telling the truth, the Russian authorities continue to believe in the “magical powers” of disinformation, Martynov writes. “For almost five years we have lied about the Malaysian Airlines plane shot down over Donbas,” he recalls, referring to the civilian flight hit by a Russian missile over eastern Ukraine in July 2014. “And pleading guilty and apologizing is still considered a sign of weakness.”

Read Martynov column on Iran’s decision to take responsibility for the crash here.

“Ground zero” of the Russian environmental movement is celebrating a small victory: on January 9, 2019, a local court ruled plans to construct Europe’s biggest landfill at the Shiyes station in northern Russia illegal. This is the first court victory for local protestors in Shiyes, who are now inspiring others.  Our correspondents just came back from the southern region of Rostov, where we reported on another environmental protest movement over the construction of a different landfill.

Buried under someone else’s trash. Residents of rural settlements near the region’s capital city of Rostov-on-Don have been holding round-the-clock protests since October 24, 2019. Local officials bent laws and allegedly falsified documentation to build a massive landfill there. The landfill is meant to take in garbage from Rostov-on-Don, where the population of just over a million people produces 600 thousand tons of trash per year. Local residents want nothing to do with it and have been blocking the passage of the construction machinery.

Garbage, unity, revolution. The trash-processing company bought 98 hectares of farmland from the Myasnikovsky District for the construction of the landfill. Activists insist that the sale wasn’t transparent. Despite living in acute poverty, residents from one rural locality, Nedvigovka, crowdfunded their own environmental review, which warns against a future landfill. And when 70-tons of construction vehicles arrived in the area, clashes forced the machinery out.  Meanwhile, residents of another rural locality, Veselyy, filed a lawsuit against the district administration that sold their land – and after the recent legal victory for the anti-landfill activists in Shiyes, they feel confident they will win their case too.

Read more about the environmental protests in Rostov here.

Another high-profile case is casting light on the widespread use of torture as an investigative tool in Russia’s pre-trial detention centers.

“Anti-Putin coup.” In late January 2020, verdicts will be handed down in the so-called “Network Case” – in which members of the leftwing organization known as the “Network” (or Set’ in Russian) are accused of terrorism and plotting an alleged coup against Russian President Vladimir Putin. While prosecutors are requesting sentences ranging from six to 18 years in prison, the charges are based on confessions forced out by torture. All of the defendants refused to confess in court, but their complaints about torture were either dismissed or even deemed legal.

Routine electrocution. Dmitry Pchelintsev stands accused of organizing the “Network.” He was tortured with electric shocks. In his words, “enduring this is impossible.” “They [electrocuted] me maybe five times without questions – probably to suppress my will,” he recalls. “Then they said: [in case] you don’t understand, you’re in the hands of the FSB. We will not play, you have to answer the questions now. Answers [like] ‘no,’ ‘I don’t know,’ and ‘I don’t understand,’ are wrong answers.”

We bring light to the torture cases, but there are too many. Novaya Gazeta has continuously exposed torture in the Russian penitentiary system. In one notable case in April 2018, an entrepreneur accused of fraud died in a pre-trial detention center in St. Petersburg. The investigation ruled it a suicide, but his spine was broken and there were traces of an electric boiler in his mouth. In another high-profile torture case from July 2018, Novaya Gazeta published a leaked video of employees at a penitentiary in Yaroslavl viciously beating an inmate. The video made it possible to establish everyone involved in the incident and bring the matter to court (the trial will begin at the end of January).

Systemic torture gets worse. These are just two examples of the widespread use of torture recorded in the Russian prison system that year. In a 2018 data-journalism project Novaya Gazeta analyzed 4,500 recent cases. We found that people in Russia are tortured not only in the army, in prison and in police custody, but in educational institutions as well. What’s more, many of the perpetrators received suspended sentences and were able to return to their posts within a couple years. Meanwhile the victims who actually sought compensation for moral damages received about ten times less than they were due.

Musician Dmitry Fyodorov died on December 26, 2019, in the Siberian city of Omsk. Officially, the young man was decapitated after falling under a train. But while the authorities are investigating his death as either an accident or a suicide, the fact that Fyodorov published a video describing how officers from the Russian National Guard had planted drugs on him just days before his death is casting suspicions on his case.

The “Omsk Golunov.” Locals call Fyodorov the “Omsk Golunov” – after the investigative journalist Ivan Golunov, who was arrested on fabricated drug charges in the summer of 2019. But while Golunov’s case sparked public outcry and protests that led to his release, Fyodorov’s life ended in tragedy. Prior to his death, police accused Fyodorov of selling drugs, but the musician insisted he was framed. And no one in Omsk believed the evidence presented against him, especially since the witnesses in the case turned out to be the investigator’s relatives. On January 4, 2019, a protest rally in Fyodorov’s memory drew hundreds of supporters to the main square in Omsk (a large Siberian city of 1.2 million). They carried signs that read, “Plant a conscience on yourself.” Local residents are now demanding that the regional Prosecutor’s Office conduct a transparent investigation into Dmitry Fyodorov’s death.

Read more about the suspicious death of Dmitry Fyodorov here.