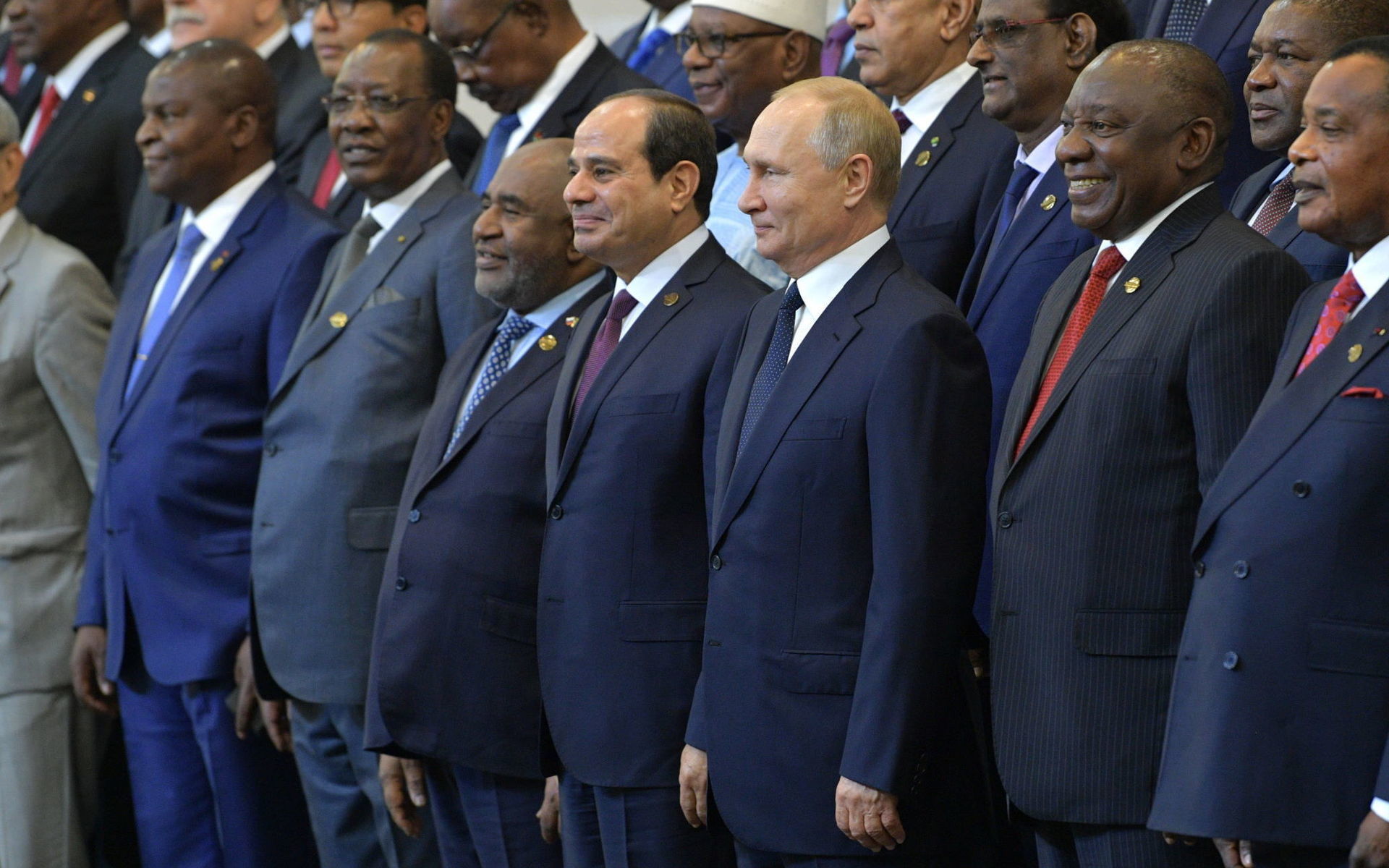 The Kremlin expands its influence in Africa with a summit in Sochi, Russia and Turkey reach an agreement on north-eastern Syria but overlook the oil fields, an investigation into forced military service in the Russian armed forces, Novaya Gazeta marks the seventeenth anniversary of the Nord-Ost hostage crisis and Russia prepares for an imminent drop in oil and gas prices.

The inaugural Russia-Africa Summit in Sochi, held in parallel with the first African Economic Forum, was one of the most talked about events this past week. The arrival of 43 African leaders in Russia caught the attention of international media and high-level politicians – a PR win that exceeded all expectations. Hosting the summit cost Russia over $70 million – twice the price of the last International Economic Forum in St. Petersburg. The Russian authorities also announced the cancellation of $20 billion in old (Soviet era) debt for African countries – placing the Kremlin in opposition to the “imperialism” of international financial institutions, which are allegedly pumping money out of their former colonies. $12 billion (800 billion roubles) worth of contracts were also signed during the two-day event.

Backstory. Competition for influence on the African continent, the poorest but at the same time fastest growing region of the world, is becoming a noticeable trend in international politics. And while the Russia-Africa Summit itself was unlikely to spark public outcry in Russia, Moscow’s increasing investment in geopolitical projects abroad is happening in tandem with falling incomes at home.

“People have yet to realize that they, as taxpayers, are giving their money to Prigozhin so he can obtain the right to trade diamonds in the Central African Republic,”

one expert told Novaya Gazeta, referring to  the expanding business and political interests of billionaire businessman and Kremlin “fixer,” Yevgeny Prigozhin, on the continent. In addition to providing key support to the continents autocrats and tyrants, Russia supplies food and arms to African countries, in exchange for minerals and agricultural products like mangoes and cocoa beans. Trade turnover is currently about $20 billion – about 10 times less than the turnover between Africa and China.

Read expert takes on Russia’s prospects for cooperation in Africa and China’s plans in relation to the continent here.

After hours of stubborn negotiations and trade in Sochi on October 22, 2019, Russian President Vladimir Putin and President of Turkey Recep Tayyip Erdoğan reached an agreement on the division of the north-eastern part of Syria. The deal was supposed to fix the mess that ensued after the Turkish invasion of Kurdish-controlled territories along the Turkish-Syrian border, a move widely condemned by many around the world. Putin was hailed as a Syria deal broker and Moscow made some serious commitments, agreeing to become a guarantor for Syrian Kurds against the Turkish army. But the biggest prize – Syria’s main oil and gas fields on the east bank of the Euphrates river, which are on territory under Kurdish and American control – appear to have been overlooked. Although a combined Syrian-Russian tactical battalion once tried to access the area, the American and Kurdish forces drove them out in the incident on February 7, 2018. Oil production in the region could provide key financing for operating expenses in Damascus and it was this zone that prompted U.S. President Donald Trump to make a u-turn on the complete withdrawal of U.S. troops from Syria. And while the Kremlin had a chance to leverage the deal-brokering with financial gain from Syrian oil, it failed to do so.

Read Pavel Felgengaeur’s explainer on how oil was overlooked during Putin and Erdoğan’s Syria negotiations here.

As of January 2018, a decree from President Vladimir Putin upped the number of people serving in the Russian Armed Forces to over 1.9 million, of which over one million are military personnel. Although official data regarding the army is often inaccessible to the public, we believe that about 250,000 of these people are officers. And according to Novaya Gazeta’s investigation, not all of them remain part of the troops of their own free well. We spoke to several lieutenants who claimed that they are unable to resign from their posts and believe that this is a widespread problem.

When Lieutenants forced to serve their homeland attempt to break their contracts, their family members face threats and intimidation.

This can range from criminal prosecution to the lieutenants being banned from leaving the garrison.

Military Base Shooting. This story takes place against the backdrop of another recent scandal for the Ministry of Defense. A Russian conscript soldier opened fire on his fellow servicemen at a military base near the Siberian city of Chita on October 20, 2019, killing eight people and injuring two others. The soldier was arrested and now faces life in prison. While Ministry of Defense claims that he suffered a nervous breakdown, the media has reported another version of the events, alleging that the soldier was facing persecution on ethnic grounds.

Backstory. Officers in the Russian army, air force and navy serve on a contract basis, although there is a mandatory 12-month draft for male citizens aged 18 to 27. While there is no official ban on the termination of military contracts, experts say that there is a “verbal order” from top state officials on maintaining the size of the contract army. And a lack of legal clarity makes it possible to simply not sign the requests from those who want to leave the army. According to the Ministry of Defense, they carefully check the motivations and reasoning prompting military personnel to break their contracts.

On October 23, Russia remembered one of the most traumatic moments in the country’s modern history, the Nord-Ost Hostage Crisis. On that day in 2002, terrorists seized over 900 hostages  at the Dubrovka Theater Center in Moscow, during a showing of the musical “Nord-Ost.” The terrorists demanded the immediate withdrawal of Russian troops from Chechnya, where the Second Chechen War was being fought. Novaya Gazeta covered the tragedy in detail in 2002, investigating the circumstances of the assault and the actions of the Security Services (FSB) operational headquarters that authorized the raid. The terrorists demanded Novaya Gazeta correspondent Anna Politkovskaya as a negotiator and on October 25, she and investigations department editor Roman Shleinov went to the captured theater to bring the hostages water and juice. Russian Special Forces stormed the theater three days into the crisis on October 26, using an unknown chemical nerve gas to defeat the terrorists. At least 130 people died, many from the effects of poisoning. The chemical makeup of the gas was classified and the people affected were not given an antidote. The details of the Special Forces raid and the cause of death of many of the hostages has not been disclosed to this day, but many say the crisis was a turning point in the Putin era.

On the anniversary of the tragedy, journalist Katerina Gordeyeva released a documentary about the Nord-Ost hostage crisis. You can also read Anna Politkovskaya’s report from inside the Dubrovka Theater here.

Preparations for the End of Russian Oil, Explained

With the price of oil on the decline and the Russian economy so heavily dependent on export revenues from oil and gas, the Kremlin is looking into long-term strategies to deal with this growing problem. According to the Minister of Economics, Maxim Oreshkin, having an “unpegged exchange rate” is the main solution for now. Although the price of oil has fallen, the value of the dollar has gone up, and since Russia’s oil and gas trade on international markets is done in dollars, budget revenues in terms of roubles have not declined. That being said, the state is still working on a much broader plan to cope with falling oil and gas prices. This will involve an in increase taxes and fees, improvements to the administration, as well as reducing social expenditure from the state budget, primarily by dismantling its main expense – the pension system. The Ministry of Finance has accumulated $124 billion in reserves, and intends to add an additional $100 billion to the country’s financial cushion in the next three years. The Government is also planning to reduce consumer lending to the population and transfer the bulk of the taxation burden from the energy industry to the non-resource sectors of the economy and the population. According to Economic expert Maxim Averbukh, this plan is all well and good, but it comes at a high price – a total drop in the standard of living for Russia’s population.

Read Maxim Averbukh’s expert take on how the Russian state is preparing for falling oil and gas prices here.