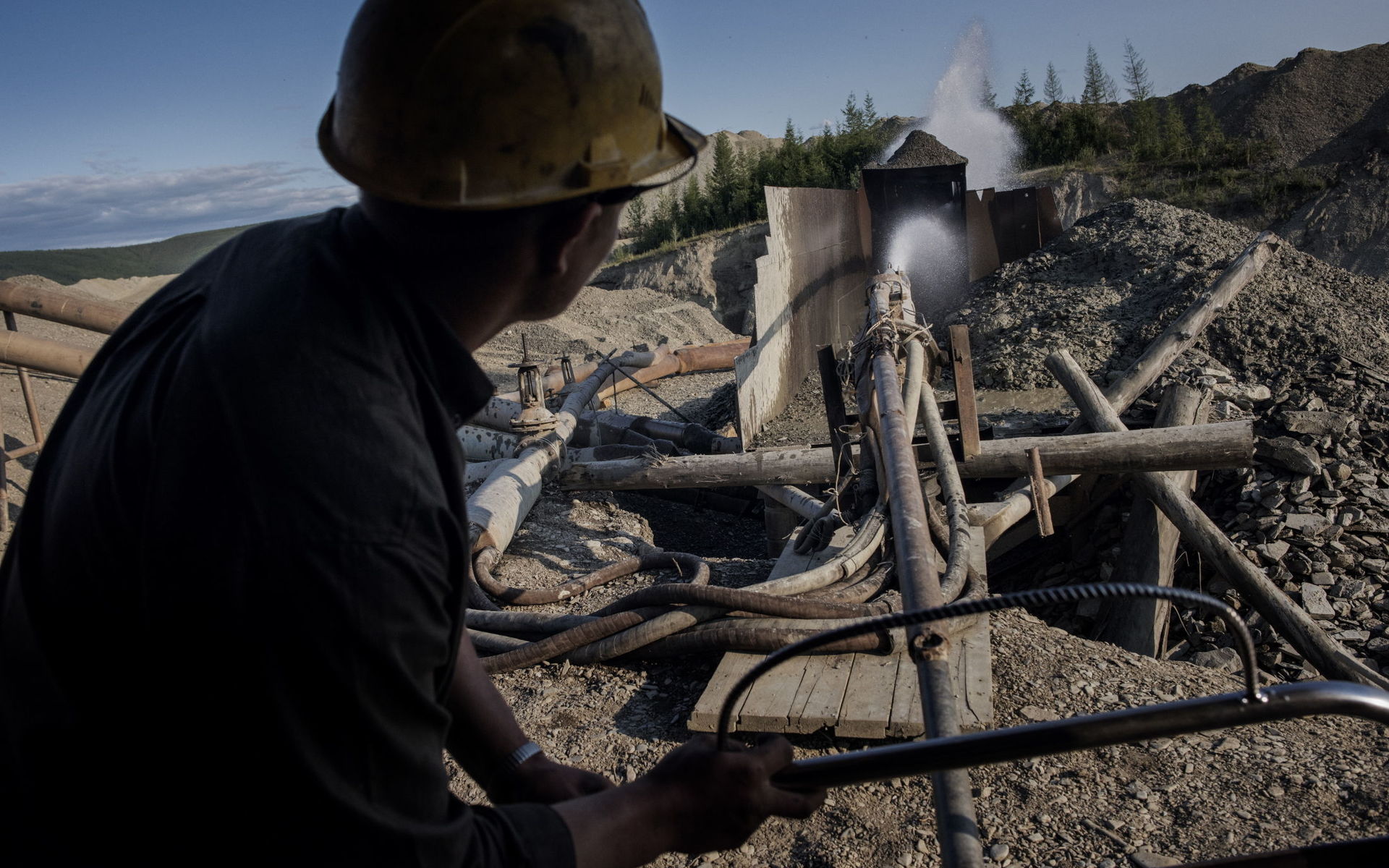 An interview with the wives of six Jehovah’s Witnesses imprisoned for “extremism,” a Novaya Gazeta correspondent takes on the Russian Foreign Minsitry over the murder of three journalists in the Central African Republic, a dam bursts at a gold mining cooperative in Siberia, a second wave of charges in the Moscow Case and the security forces lay siege to a Siberian tuberculosis treatment facility.

The latest development in the Kremlin’s ongoing crackdown on Jehovah’s Witnesses has seen six believers given sentences ranging from two to three and a half years in prison on charges of “creating an extremist group” in Saratov. Lawyers say the men are being accused of reading the Bible, saying prayers and performing spiritual songs. The investigators consider these actions a continuation of the activities of the Saratov branch of the Jehovah’s Witnesses, a local religious organization that the Supreme Court banned along with four other regional branches of the Jehovah’s Witnesses in 2017. After the Supreme Court issued its decision,  the U.S. State Department called on Russia to respect its citizens’ rights to religious freedom. The Head of the State Department’s Press Service, Morgan Ortagus, responded to the latest verdict on Twitter, saying that the believers were being punished for peaceful religious activity. But Russian Presidential Press Secretary Dmitry Peskov told reporters that he had no information about the lawsuit.

“A command was given at the highest level, [saying] there should be extremism cases. And where would you get so many extremists in the provinces, especially after the decriminalization of reposts [online]?

In this respect, the Jehovah’s Witnesses were a goldmine.” – Artur Leotyev, a lawyer at the Saratov trial

Mass Detentions. On February 15, 2019, security forces in the city of Surgut in western Siberia carried out a massive detention of suspected Jehovah’s Witnesses. According to lawyers and human rights activists, the detainees were tortured. The detainees said that the searches and subsequent interrogations at the Investigative Committee building went on from six a.m. until night time. Three people were taken into custody while the rest were released – and none of the witnesses remain custody today. The lawyers for those who reported the torture wrote numerous statements and complaints; examinations began but not all of them were completed.

Read Novaya Gazeta’s special interview with the wives of the convicted believers, talking about their husbands here.

Relations between the Russian Ministry of Foreign Affairs and Novaya Gazeta have turned tense over the 2018 murder of three Russian journalists in the Central African Republic (CAR). Our special correspondent, Irina Gordienko, is the ex-wife of one of the late journalists, Orkhan Djemal, and her reporting on the murders has become the focus of the controversy. On July 30, 2019, she published an article titled “Neither shame, nor investigation,” asking why associates of Yevgeny Prigozhin (the billionaire businessman and Kremlin “fixer” known as “Putin’s chef”) seem to know more about the journalists’ murder in the CAR than Russia’s Investigatie Committee, Ministry of Defense and Foreign Ministry combined.

According to the report (which Gordienko submitted on July 17), the journalists’ personal belongings were still being held at the Russian Embassy in Bangui and the Ministry of Foreign Affairs refused to help while the Investigative Committee claimed to have no money. The Russian Foreign Ministry has been trying to dispel the report since August, refuting information Gordienko personally obtained from an investigator by claiming that the late journalists’ possessions were already in Moscow on July 31. Correspondence with the Head of the Foreign Ministry’s Press Department, Maria Zakharova, has included insults – she called the article fake.

Backstory. Russian journalists Orkhan Djemal, Kirill Radchenko and Aleksandr Rastorguev were killed in the Central African Republic in July 2018. They were planning to shoot a documentary investigation into Yevgeny Prigozhin’s activities in Africa – part of Russia’s large-scale political and economic expansion on the continent – as well as his affiliation to Russia’s only private military contractor, the Wagner group. Prigozhin’s associates are believed to be involved in the murder of the three journalists.

Read Irina Gordienko’s public response to the Ministry of Foreign Affairs here and her article “Neither shame, nor investigation” here.

The collapse of a dam on the Seiba River killed 15 gold miners near the remote village of Shchetinkino in the Krasnoyarsk Krai region of Siberia. The destroyed dam was part of a technological reservoir belonging to a gold mining cooperative – known in Russia as an artel. The dam collapsed around six a.m. on October 19, 2019, flooding the dormitories of the encampment where 74 workers slept. Thirteen of the miners are still missing, three were taken to hospital in serious condition and another 11 workers went to hospital with minor injuries.

Unregistered Dams. According to the Premier of Krasnoyarsk Krai, Yuri Lapshin, the destroyed dam at the gold mine was built illegally and “in violation of all conceivable norms.” The dam was not included in the registry of the Federal Service for Ecological Technological and Nuclear Supervision (Rostekhnadzor) and had never been inspected, despite the structure’s substantial size and visibility.

“[The Dam] was perfectly visible to everyone around it, it was visible in images taken from space, but none of the supervisory authorities were interested in it. And it’s not the only dam like it here – until recently there were four and their collapses (on less of a large-scale, of course) occurred periodically. So what’s surprising now is not what happened now, but the fact that now everyone knows about it,” – Novaya Gazeta correspondent, Alexei Tarasov.

Ecological Damage. According to one explanation of the events, the cause of the Shchetinkino dam’s collapse could have been the destruction of another dam located further upstream.

But the dam bursting was preordained by greed and, apparently, corruption. In this gold mining region, the artels cause irreparable damage to the rivers and the local ecological environment as a whole.

In line with the growing environmental movement in Russia, local environmentalists have repeatedly appealed to the authorities with requests to inspect the activities of the companies involved in gold mining, but nothing ever happened. This is most likely because the cooperatives were able to negotiate with the authorities, allowing unregistered dams to appear. And while the collapse of this dam ended in tragedy, apparently it’s the last one.

Read Novaya Gazeta’s report from the site of the dam’s collapse, here.

In a continued response to the pro-democracy protests this summer, Russia’s Investigative Committee have launched a new campaign in the Moscow Case, charging five individuals with alleged “violence against government officials.” According to Novaya Gazeta Columnist Kirill Martinov, this is happening because the  investigators are driven by a “different logic.” While at this point everyone knows that there was no “mass rioting” in Moscow this summer, the security forces have already begun to understand that once “terror machine” stops, they themselves will become unnecessary – and they don’t know how to do anything besides falsify criminal cases. Therefore, it is vital for the Investigative Committee to expose some type of “conspiracy,” which is the same reason they are going after Alexei Navalny’s Anti-Corruption Fund.

“The security forces wanted to quickly frighten people for their interference in politics. They didn’t manage to do this and now they are moving towards a war of attrition against society.” – Novaya Gazeta Columnist, Kirill Martinov.

The Case of Aidar Gubaidulin. Programmer Aidar Gubaidulin was charged with “violence against government officials” during the protests in Moscow, for throwing a plastic water bottle towards a member of the Russian Guard. He spent over a month in a pre-trial detention center and then went on to become one of the most active participants in protests supporting other prisoners caught up in the Moscow Case. In the face of new charges, Gubaidulin left the country fearing arrest. In a goodbye letter, he wrote that the two weeks he spent with political activists while “at large” were the most interesting of his life and expressed regret over having to leave. According to Kirill Martinov, this decision was understandable: “going to jail on false charges is difficult, even if you think that that you suffered for a just cause. But it’s even harder knowing that you could go back to prison at any time,” he said. However, he pointed out that given the arbitrary decision making in Russia’s legal system, professionals will continue to leave Russia. “The paradox of Gubaidulin’s emigration is that it benefits the current Russian government (fewer problems) but it hurts the interests of a country that needs young professionals,” Martinov said.

Read Kirill Martinov’s full column on the resurgence of the Moscow Case here.

In the remote village of Chernavskoye, beyond the Ural Mountains, masked men entered a branch of the Kurgan Regional Tuberculosis Dispensary early on the morning of October 17, 2019, and forcibly removed several medical workers and patients who refused to accept the closure of the medical facility. Earlier this week, a lineup of 25 policemen surrounded the perimeter and besieged the branch, cutting off the heating and lights in an attempt to prevent doctors from interfering with the final stage of the “optimization” reform process. The regional authorities decided to “redistribute” the doctors and patients at the end of the summer and the branch’s last day was scheduled for October 15. That being said, formally all employees are supposed to sign a consent form, without which the reforms have no legal force. The doctors and nurses at the dispensary refused to sign the consent because they (and their patients) opposed the redistribution process for two reasons:

Backstory. Tensions over the state of Russia’s healthcare system have been building up since 2012, when Putin ordered a substantial salary raise for doctors working in the state-owned healthcare system without allocating funds to pay them. As a result, officials had to redistribute medical workers and their working hours, leading to dramatically increased workloads for doctors. Situations similar to the one in Chernavskoye have also taken place at two other branches in the region. According to one expert, a reduction of personnel is what’s actually taking place under the guise of “optimization” – and people are being left out of the decision making process.

Read the special report from the Chernavskoye Tuberculosis Dispensary here.