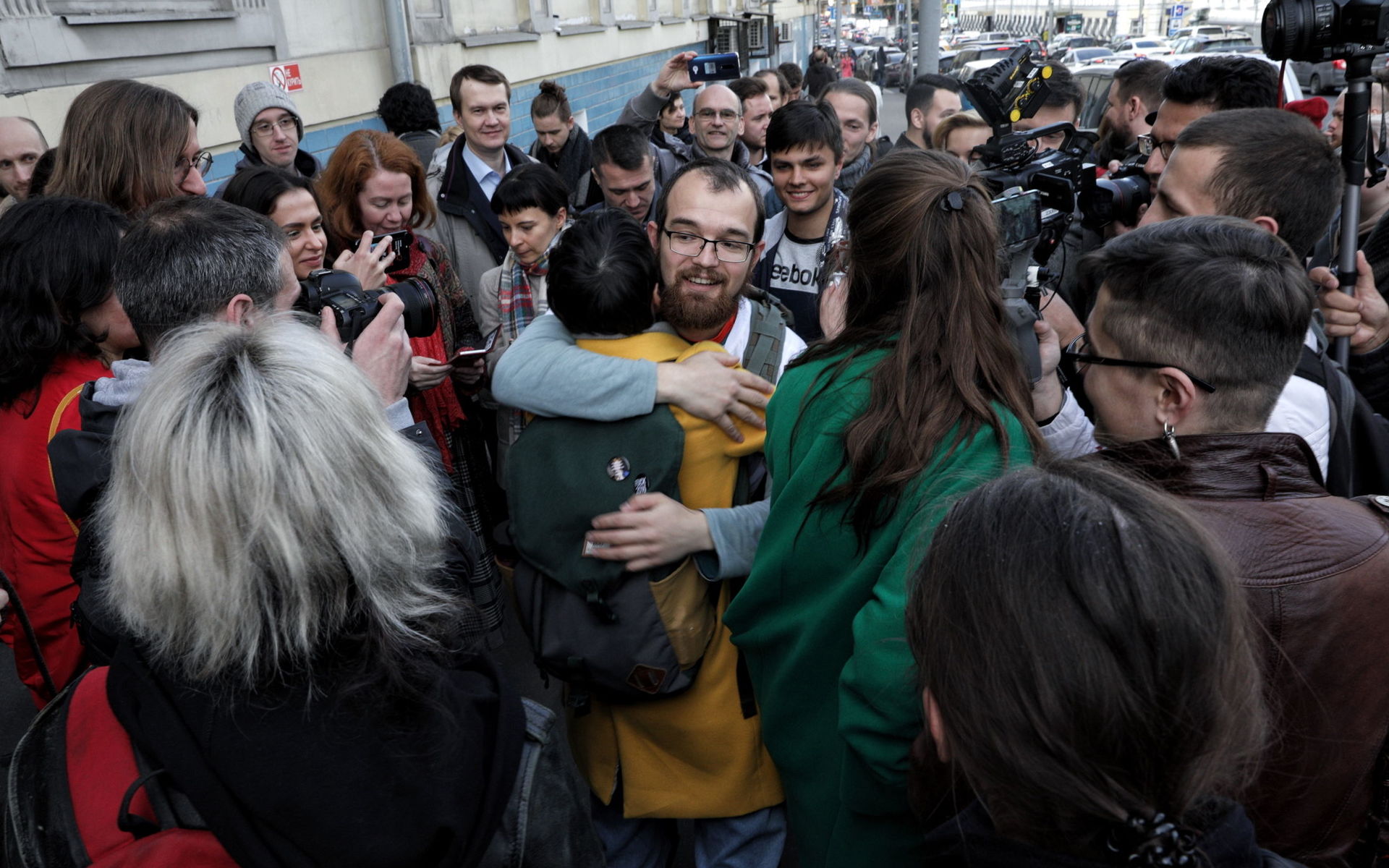 Ukrainian film director and, until recently, the most high-profile political prisoner held in Russia – Oleg Sentsov – sat down with Novaya Gazeta for his only interview with a Russian publication following his release from Russian prison. Russia returned Sentsov to Ukraine on September 7, 2019, along with another high-profile political prisoner, anarchist activist Aleksandr Kolchenko, and 33 other Ukrainian captives. Sentsov and Kolchenko spent over five years in the Russian prison system, during which Sentsov was on hunger strike for 145 days. The two had been sentenced to 20 and 10 years imprisonment, respectively, on trumped up terrorism charges, after being arrested in Russian-controlled Crimea in May 2014.

In his exclusive interview with Novaya Gazeta, Oleg Sentsov talks about the “atmosphere of pressure” in prison, the future of the fight for Ukraine and surviving this time in his life.

“In late April – early May, it became clear that the Donbas was getting heated. Nothing could be done in Crimea, we had lost it. And I decided to go there. I had friends in volunteer battalions and planned to join them, even managed to buy a ticket to Kyiv. The found it [during the arrest] and said, ‘So you’re trying to escape!’ That’s how I didn’t go to war and went to prison instead.”
“Many people say that the exchange happened unexpectedly but there was nothing unexpected for me. I have been waiting for that for all five years, from the very first day of my detention.”
“I am for Ukraine, I am against Putin's Russia and I will fight as best I can, but I do not support actions directed against health of other people, even if they are military officers. While they don’t shoot at us, we have no right to shoot at them.”
“If I wanted to commit suicide, I would find much faster ways. I understood that a hunger strike was an inefficient way, that it would not change anything, but that was the last thing that I could do. It was not a death wish, I love life.”

Read the full interview in English here (or in Russian here).

Courts are still penalizing participants in the recent wave of anti-government rallies Moscow, so we’re bringing you another high profile case.

The Minyailo Case. Activist Alexei Minyailo unexpectedly walked free last week when his case on “mass rioting” was thrown out. Minyailo spent a month and a half in pre-trial detention after being arrested as part of the July 27 case, despite the fact that he hadn’t even attended the protest in question. Although it would seem as though the authorities are agreeing that there was no “mass rioting” in Moscow this summer, there are still five people under arrest on charges of violence against police officers and extremism. Another six have received real prison sentences.

Backstory. The demonstrations in Moscow began in July of this year, when a number of independent candidates were barred from participating in the Moscow City Duma elections. The biggest protest took place in the capital on July 27, 2019 and 1,388 people were detained. For many, the Moscow City Duma elections were seen as a trial run for the 2024 presidential elections – when Putin’s final term will come to an end and a transition of power will have to take place in Russia. That being said, the elections in Moscow have demonstrated that the political system is in crisis.

The political terror the Security Services are carrying out against citizens isn’t working and the authorities are at risk of sparking a new wave of protests.

What’s more, the protests aren’t over yet. On September 29, 2019, a government sanctioned protest in Moscow in support of the political prisoners from the “mass rioting” case drew 25,000 people.

Just when it looked like Russian athletes were set for the 2020 Summer Olympics in Tokyo, the Russian Anti-Doping Agency (RUSADA) has been hit with another scandal. Despite the team receiving an official invite to participate in the games, they could now be denied access due to violations uncovered in an investigation into the manipulation of the database of Moscow’s anti-doping laboratory. The investigation confirms the claims of German journalist Hajo Seppelt, who is known for his work uncovering systematic, state-sponsored doping in Russian sport. The current fraud was revealed when comparing a copy of the database obtained from the former head of RUSADA, Grigory Rodchenkov, in November 2017 with the official dataset filed in January – demonstrating that separate files with positive samples had disappeared from the database.

Backstory. Over the summer, half a dozen Russian athletes (mostly weightlifters) were disqualified from competing on the basis of RUSADA database – and almost three hundred other athletes are also (unsurprisingly) suspected of doping. Nevertheless, the painstaking “editing” of the database still comes as a shock. It’s still unclear who could be responsible for manipulating the database in the time period between Rodchenkov’s flight into witness protection in the United States and the start of the investigation, given that the laboratory was sealed. But because this is the second doping scandal since the 2014 Sochi Olympics, Russia could face much more serious consequences this time around.

The Russian Ministry of Finance has published its draft budget for 2020, as well as for the 2021-2022 planning period. The budget appears to be running a surplus – but taking a closer look at the draft gives a lot of insight into the Kremlin’s priorities in the context of the ongoing economic and geopolitical pressure.

Experts Weigh In. Experts claim that while low economic growth rates are good for stability, the stagnant state of the Russian economy could provoke great social upheaval in the long term. In terms of specific items of expenditure, the highest funding increases went to classified items, which makes sense given the country’s difficult geopolitical situation and Russia’s increased presence in various regions of the world. Social spending, on the other hand, did not grow as much as was hoped, given the rate of budgetary income at various levels. Russian experts argue that if the government made it a priority to increase welfare of vulnerable segments of society rather than accumulating a “safety cushion,” this could have a multiplier effect for the entire economy.

Telecommunications operators in Ekaterinburg and Tyumen have installed equipment for isolating the Runet and launched it in test mode. The experiment involves all major mobile operators, including MTS, MegaFon, Rostelecom, VimpelCom and others. Using Deep Packet Inspection (DPI) technology, the equipment is able to block “forbidden content” – just as it was used in Azerbaijan in 2017 to block opposition news sites and calls via Skype and WhatsApp. According to the test participants, the experiment in the Urals has so far been carried out in a way that’s “imperceptible to users.” And this does indeed seem to be the case. The Telegram block at Tyumen State University went unnoticed among students and teachers. Although Telegram is Roskomnadzor’s main target for blocking, the app could still be accessed via Wifi, even though the university’s provider is one of the participants in the blocking experiment – Rostelecom.

Experts Weigh In. According to experts, the firewall doesn’t seem very effective, at least for now. DPI technology can be bypassed in just one click using a proxy or VPN. They suggested that the real purpose of the experiment is not so much to actually test the sovereign internet but rather to estimate the costs. 30 billion roubles (over $46 have been allocated for implementing the sovereign internet law, with plans to spend 20 billion of it on equipment. Whether or not this equipment will work is unclear.

Against the backdrop of the demonstrations in Moscow this summer, deputies from the State Duma urgently created a commission to deal with questions of foreign interference in Russian affairs. As one of its first acts, the commission – led by former Investigative Committee investigator Vasily Piskarev – undertook an attack on the German state-owned public broadcaster Deutsche Welle.

Deputies accused the outlet of quoting the slogan “Moscow, get out!” during the demonstration on July 27 and in doing so, showing “signs of justifying extremism” and undermining state principles.

Piskarev has compiled a long list of “suspicious” media outlets, working in Russian from abroad. This includes the BBC Russian service, RFE/RL, Voice of America and Meduza. Now, the commission is threatening to take away Deutsche Welle’s accreditation in Russia, meaning that the largest international publication could be banned from working in the country.

Why It Matters. The deputies aren’t just bullying foreign journalists, but also their own people. All independent Russian media – from television to online sites – have almost entirely been purged, leaving only those that share “patriotic information,” in the spirit of the late USSR. Now, people are once again listening to Voice of America, although under normal circumstances it would never have occurred to anyone to get local news from foreign broadcasters. Having almost killed off local journalism, the Russian authorities gave carte-blanche to foreign media. But the next step will be to drown out those voices. Given that Deutsche Welle’s audience in Russia is relatively small, it’s clear that the real goal of Piskarev’s campaign isn’t to get revenge on the Germans for incorrect quotes. Pressure on foreign media is essentially increasing for test purposes, as Russia approaches the entry into force of its sovereign internet law – which would enable a ban on a much bigger entity, like Facebook.

To read all about the Duma’s campaign against foreign media, click here.