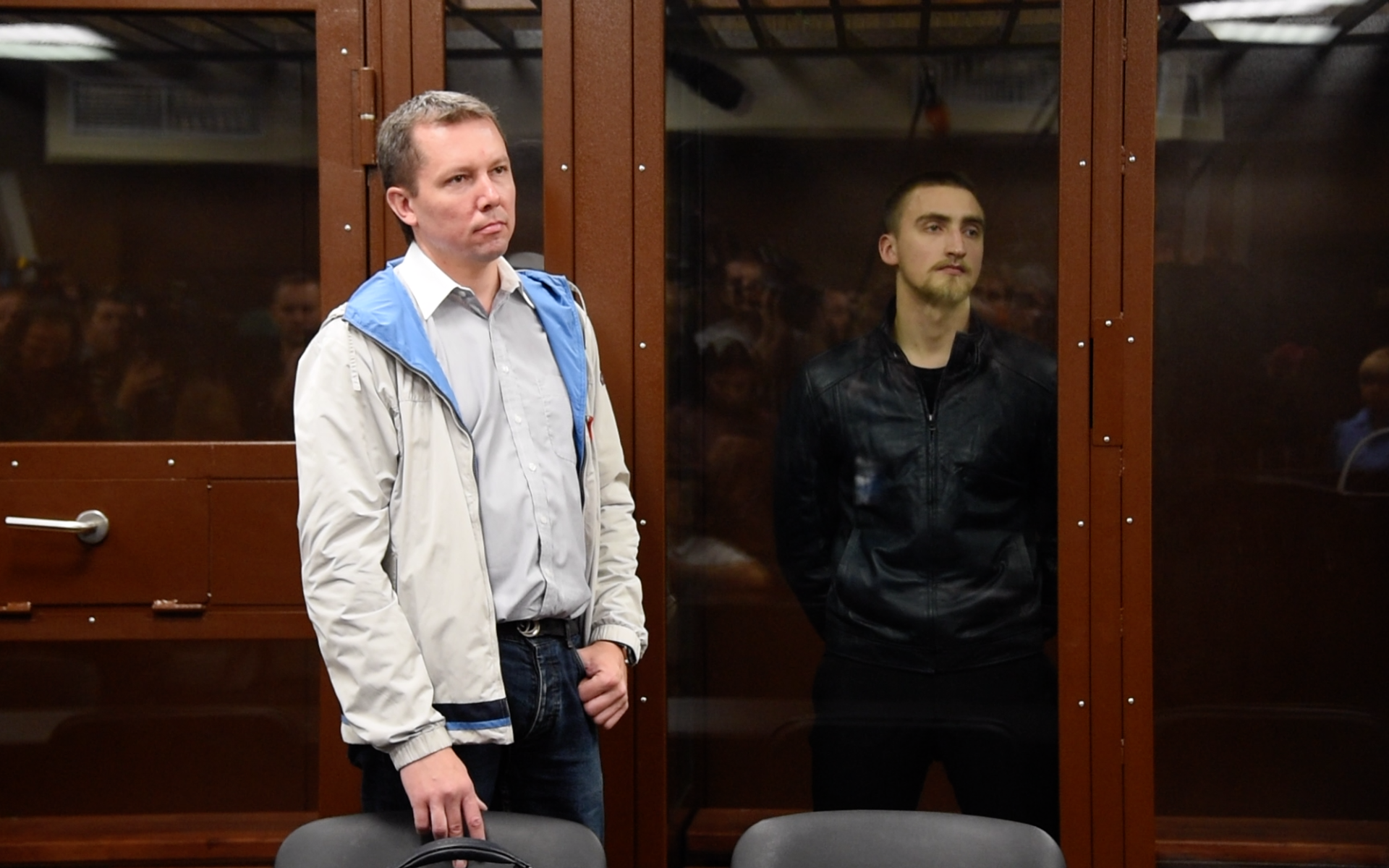 Welcome! The new English language newsletter from Novaya Gazeta brings you a weekly overview of our finest journalism covering and explaining key news events across Russia. This includes a rundown of Novaya Gazeta’s high-stakes investigative reporting, as well as analysis aimed at answering your questions about the latest developments. In short, we bring you everything you need to know about Russia, courtesy of a legacy newspaper in the country. Subscribe here.

An actor becomes a symbol of solidarity in Moscow’s pro-democracy protests, the arrest of an indigenous spiritual leader amid anti-government turmoil in Siberia, Russia’s eco-protests, an exclusive report on domestic violence against children and Pussy Riot activist Maria Alyokhina’s reflections on feminism in Russia.

On Monday, a court sentenced actor Pavel Ustinov to three and a half years in prison for resisting detention during the pro-democracy protests on July 27, accusing him of dislocating the shoulder of a National Guard officer. The sentence was unfair – Ustinov had not taken part in the rally. What’s more, the judge refused to watch the video of his detention, where it is clear that he did not resist arrest.

The unfair sentencing caused mass protests in Russia among well-known theater and film actors, who launched a social media flash mob and then formed a picket outside of the building of the presidential administration. This sparked an unprecedented public campaign in support of the protesters arrested in the so-called Moscow Case.

Hundreds of thousands of Russian citizens publicly opposed the persecution of participants in peaceful rallies and a variety of people published open letters in support of the prisoners.

This simple, large-scale solidarity action from civil society yielded results. The Prosecutor’s Office – which had initially asked for a six year prison sentenced – decided this was too harsh. Ustinov was released from custody ahead of an appeals hearing set for September 26, 2019.

Selective Solidarity. While the expectation is that the verdict will most likely be cancelled, the case has sparked public discussion in Russian society because the solidarity that emerged in support of Ustinov came from the acting community. This begs the question: should citizens stand up for their own or for everyone? According to Novaya Gazeta columnist Kirill Martinov, there’s no need to condemn those who took part in the professionally motivated solidarity action and are prepared to defend their own. «When people see a clear injustice towards those they understand and are close to, they begin to notice other examples of injustice all around,» Martinov explains. «Guild solidarity evolves into civic solidarity, and this happens not because people suddenly have a ‘moral awakening,’ but because it is no longer possible to tolerate injustice in relation to their own people.»

Backstory. Pavel Ustinov is the sixth person who has been convicted in the Moscow Case initiated after the July 27 protests against independent candidates being blocked from running in the Moscow City Duma elections. Six people were charged with violence against police and sentenced to a total of 15 years in prison. Meanwhile, six more people remain under investigation.

This spring, indigenous spiritual leader Aleksandr Gabyshev left the east Siberian city of Yakutsk on foot and began to walk 20 kilometers a day. His goal was to reach Moscow, to get to the Kremlin and «expel Putin.»  He planned to arrive by 2021 – and had already gathered an «army» of people and dogs, who joined him on his long walk. The shaman crossed Chita, reached Baikal and arrived in Buryatia, where he decided to join protests against local election rigging. There, law enforcement seized the vehicle carrying the caravan’s supplies, giving the driver 13 days in custody for disobeying the police.

Meanwhile, shaman Gabyshev reached the Irkutsk region, where, on the morning of September 19, armed, masked men detained him near the village of Vydrino and took him to a detention centre in Ulan-Ude, where he was put on a plane back to Yakutsk. According to the Interior Ministry, Gabyshev is wanted for an unspecified crime in Yakutia. However, his name doesn’t appear on any wanted lists. And although he has been walking along the federal highway since the spring without hiding at all, he had become a trigger for protests – and ahead of him were troubled cities like Irkutsk, Krasnoyarsk, Novosibirsk and Omsk.

Backstory. Shaman Aleksandr Gabyshev (also known as the Yakut-shaman Sasha-Yakut and shaman Sanya) has become a phenomenon in Russia, and while some consider him a madman or a joker, others consider him a hero – which means he is approaching the role that holy fools played in medieval Russia. Although he admitted to having suffered from mental illness, he claims that he has been cured. And many see him as an adequate reaction to the Kremlin’s irrationalism and propaganda. Although he is still in custody, his associates are still enroute to Moscow and have declared on Youtube that they are «coming from God» – carrying flags with the words «for the return of freedom to Russia and «the way of the shaman.»

On September 22, a unified day of eco-protests took place in Russia. The residents of cities and towns across the country attended demonstrations and pickets in defense of the Shiyes station, the planned location of Europe’s biggest landfill. This station up north – which no one knew about a year ago – has now become a hot spot on the map of the country’s social protests. People in over 20 cities took part in Sunday’s protest, including in Arkhangelsk, Murmansk, Nizhny Novgorod and St. Petersburg, while Moscow and the surrounding region had demonstrations the night before.

For the past year, the authorities have done everything they could to make the environmental protest in Shiyes political.

The Arkhangelsk Governor, Igor Orlov, called the environmental activists riff-raff. In doing so, he seems to have committed political suicide and is unlikely to be re-elected during the elections this fall.

However, protesters in Shiyes aren’t just standing up to the regional authorities, but to the federal ones as well. At the rally in Arkhangelsk a demand for the president’s resignation was voiced for the first time.

An Anthropological Phenomenon. Shiyes has become an anthropological phenomenon, not just a story about ecology. It demonstrates that «marginal populations» are able to unite, build horizontal connections and organize themselves. But the repressive machine is also working hard against the defenders of Shiyes. The total sum of fines they have received is close to two million roubles, while many have gone through administrative arrest. Three criminal cases were also initiated, one of which was against activist Andrei Khristofonov (known as Drevarkh the Enlightened), who was beaten by police and forced to emigrate to Ukraine.

Backstory. Protests have continued for over a year over the establishment of a landfill for garbage from Moscow at the Shiyes station. The building of Europe’s biggest dump is also being carried out without permits. Due to protests in May, the authorities announced that construction had been suspended, but activists say it’s ongoing. Although protesters made an effort to comply with formal requirements – sanctioned protests, going to courts, paying fines – they have not been able to achieve compliance with the law. Meanwhile, the authorities have responded to popular opposition with a new proposal: rather than implement garbage reform, they are suggesting building another landfill, in the village of Katunino in the Primorsky region. A few days ago, a local forum responded to these plans with a strong «no.» But no one is cancelling the construction of the landfill.

For the full story on the unified day of eco-protests, read the original article in Russian here.

The fact that children are beaten in Russia is, regrettably, not news. And as a result of the country’s decision to decriminalize domestic violence at the beginning of 2017,

Russia became the last European country where children can be tortured and sexually assaulted with no consequences for the perpetrator in 80 percent of cases.

In an exclusive report, Novaya Gazeta analyzed data from 500 hundred court decisions from January 2016 to June 2019, where crimes were committed against children under the articles on torture, neglect, causing grievous or moderate bodily harm or harm to health, beatings and murder. Overall, violence was rarely punished at all. Here’s what else we found:

Backstory. Child abuse is at the center of another major debate in Russian society, provoked by the case of the Khachaturyan sisters. At the end July 2018, the three girls – 19-year-old Krestina, 18-year-old Angelina and 17-year-old Maria – killed their father, Mikhail Khachaturyan. In court, they explained that their father had tortured them for years and raped the two older sisters. Despite the fact that the investigation found evidence of violence against the girls, they are still being accused of pre-meditated murder – and Russian society has not come to a consensus as to whether their actions were justified.

«In Russia, there is one tradition in relation to the wives of the country’s leaders – the lack of a right to a public, official existence. Wives of the head of state did not exist. Therefore my appearance next to Gorbachev was perceived as a revolution,» Raisa Gorbacheva once said in an interview. Gorbacheva broke this stereotype, but not everyone was pleased to see her in fancy outfits as they waited in lines for food. That being said, her charitable work had a huge impact and didn’t end after the Soviet Union fell. In 1997, she created the «Raisa Maximovna Club» with the mission of increasing the role of women in the country’s public life, and discussing and developing proposals to combat child neglect, the growth of violence and gender inequality.

Today, feminism still has a long way to go in Russia, but, as Pussy Riot activist and feminist Maria Alyokhina writes, «Even in this context, female activism as a private initiative becomes the political resistance behind which is our future.

Activists and public figures, regardless of hate, threats to their lives and constant harassment are asking uncomfortable questions, raising funds and supporting each other.»

To mark twenty years since the passing of Raisa Gorbacheva, Pussy Riot activisit and feminist Maria Alyokhina reflects on the Soviet Union’s first lady and the future for women in Russia. Read her op-ed here.